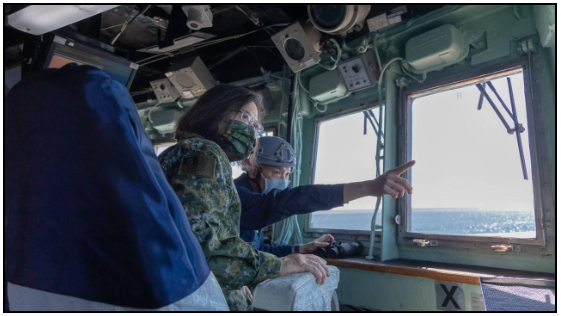 From July 25-29, the Republic of China (ROC) armed forces conducted the live-maneuver portion of the 38th iteration of Han Kuang (漢光38號實兵演習), a joint military exercise that represents the single largest training event in the Ministry of National Defense’s (MND, 國防部) yearly calendar. Conducted annually since 1984, Han Kuang is intended to simulate Taiwan’s response to an invasion by forces of China’s People’s Liberation Army (PLA). The exercise is traditionally conducted in two parts: a closed-door tabletop/computer simulation phase in the spring, which was conducted earlier this year from May 16-20; and a live-maneuver phase that usually follows later in the summer or early autumn. [1] While the simulation phase is kept secret, the live-maneuver phase is much more visible to the public, and offers limited opportunities to assess the state of training for war in the ROC military—or at a minimum, to judge what the MND deems most important in terms of the military’s image and public preparations to resist an invasion.

The exercise opened on July 25 with multiple evolutions, including a series of aircraft flights to dispersal airfields in the expectation of missile attacks on ROC Air Force (ROCAF) airbases on the western side of the island. The ROCAF 1st Tactical Fighter Wing located in Tainan relocated six of its F-CK-1 Ching-kuo fighters (經國號戰機)—also commonly known as the Indigenous Defense Fighter (IDF)—to an airfield near Taitung (southeastern Taiwan) as part of a dispersal exercise, in response to notional attacks on primary airbases in western Taiwan. In this, they were joined by a single F-16V fighter (likely assigned to the 4th Tactical Fighter Wing, 21st Tactical Fighter Group) flying from Chiayi. (See here, here, and here.) The destination of these aircraft was not publicly reported, but was likely the ROCAF’s Chihhang Base (志航基地) in Taitung, the reported location of an extensive series of underground aircraft shelters.

Additional fighter aircraft were also reportedly flown from bases in western Taiwan to Hualien, along with maintenance and support personnel. Such dispersal evolutions paralleled activity on the opening day of Han Kuang in 2021, when ROCAF fighters similarly conducted dispersal flights from western Taiwan to an air base in Hualien. Also in keeping with last year’s exercise, the fighter landings served as a public relations event, with civilian onlookers photographing the low-flying aircraft.

July 25 also saw the first phase of the annual Wan-an air raid drill (萬安演習), a regular component of Han Kuang, in which members of the general public have been required to take shelter from a notional missile attack. This year’s iteration of Wan-an began on the afternoon of July 25, with air raid sirens sounding throughout the counties of northern Taiwan, and citizens receiving direction from the police to clear the streets between 1:30 and 2 PM. Many citizens also received text messages notifying them of notional aerial attacks. Additionally, the Taipei City Fire Department conducted drills to fight fires at the scenes of simulated missile strikes in two locations (Xinyi District and Banqiao Station). In a change from previous years, this year’s drill was conducted in phases: in northern Taiwan on the 25th, central Taiwan on the 26th, southern Taiwan on the 27th, and in eastern Taiwan and outlying islands on the 28th.

The exercise’s third day shifted to a greater focus on ground-oriented scenarios, including the “joint interception of invading enemy forces” at multiple locations throughout the island. One component of this was an early morning parachute drop in Pingtung County (southeast Taiwan) by 76 paratroopers jumping from C-130 transport planes. These soldiers, from the ROC Army’s Airborne Special Forces Command, reportedly conducted the jump as part of a drill to simulate dropping troops behind enemy lines.

Drills were also held in the greater Taipei area to simulate resistance to an amphibious invasion. In New Taipei City’s Bali District, a scenario was held in which mock PLA forces conducted aerial attacks and attempted an amphibious landing at port facilities near the mouth of the Tamsui River, with intent to then advance south into Taipei. In response, naval mines and counter-landing obstacles were set up by the defending forces, ROC Army tanks and armored vehicles were deployed to simulate repelling the invading ground forces, and IDF fighters and AH-64E “Apache” attack helicopters flew simulated close air support missions. On the same day, early morning anti-landing drills were also reportedly conducted by Taiwan Army infantry and armor forces on the island of Kinmen.

In tandem with these drills, a small-scale deployment exercise was conducted in central Taipei, which involved setting up a mobile military command post in the Da-chia Riverside Park area. A surface-to-air Patriot missile battery was also deployed to protect the command post, with drills conducted to simulate shifting the position of the launcher in response to combat conditions.

The fourth day of Han Kuang focused on the theme of “joint homeland defense,” with further counter-amphibious landing drills conducted at locations further south and east along Taiwan’s eastern coastline. A landing exercise was conducted on the coast near Pingtung, in which special forces personnel in rubber rafts, and troops from the ROC Marine Corps 99th Brigade in amphibious assault vehicles, made simulated assaults on the beach in order to recover ground from an occupying force. ROC Army forces also engaged in similar drills at a beach in the vicinity of Taitung, with a reported seven M60A3 tanks and 12 armored personnel carriers conducting mock assaults against the aggressor force.

Further to the north on Taiwan’s eastern coastline, a scenario was conducted involving the defense of Chiashan Air Force Base (佳山空軍基地) in Hualien County—the reported site of a large number of underground hangars and logistics facilities—against enemy warships and landing forces seeking to seize the base. A reported twelve armored personnel carriers, associated infantry, and artillery support were employed in a mock assault to “annihilate” the enemy landing forces.

On July 28, drills were conducted in Miaoli County (northwestern Taiwan) by reservists attached to the ROC Army 302nd infantry brigade, as well as soldiers of the 586th armored brigade, involving infantry and armored vehicles simulating resistance to a beach landing.

In Taoyuan (northwestern Taiwan), psychological warfare drills were held involving personnel from the MND’s Political Warfare Bureau (國防部政治作戰局), in which speaker trucks were used to simulate battle sounds and broadcast supportive messages for the ROC personnel, while a drone was used to drop leaflets and broadcast propaganda messages.

The final major evolution of this year’s Han Kuang took place in the early morning hours on July 29, with a “garrison command counter-airborne landing operation” (衛戍區反機降作戰) conducted at Taipei’s Songshan Airport. This exercise primarily involved ROC Army military police (憲兵) units—including personnel from the 202nd military police command post, the 239th military police battalion, and the 228th military police artillery battalion, as well as the 301st ROCAF counter-artillery battalion, the ROCAF Songshan base headquarters unit, and ROC Army special forces. In this scenario, the defending forces had to undertake a rapid response to repel a seizure of the airport by fifth column agents and PLA airborne forces. A press release from the MND called this evolution a successful test of the garrison troops’ ability to respond to threats, and asserted that it demonstrated intent to “more fully develop the military’s warrior spirit to guard the country and protect the people.”

Later that day, Taiwan Defense Minister Chiu Kuo-cheng (邱國正) issued a brief statement praising the positive results of the training, thanking the personnel who took part, and announcing that the exercise had concluded.

The major evolutions of Han Kuang-38—civil defense drills, aircraft dispersal flights, naval maneuvers, and simulated resistance to amphibious landings—offered no surprises, and were largely consistent with those conducted in last year’s exercise. Also consistent with previous iterations of Han Kuang was the use of the exercise as a public relations effort to showcase major military platforms and capabilities, and to present the Taiwanese public with a positive image of Taiwan’s armed forces.

One major theme that was noteworthy in Han Kuang-38 was the increased profile for military reservists in the exercise. The Taiwan military’s reserve system has long been a subject of criticism on the grounds of poor training, morale, and logistical upkeep. Yet, the Tsai Administration and the MND have undertaken initial efforts over the past year to reform the reserve system, including a limited trial program to increase reservist training periods (in recent years, just five to seven days on alternate years) to two weeks of refresher training. For this year’s Han Kuang, official media played up the role of reservists in constructing a defensive trench in New Taipei City’s Bali District, emphasizing their importance as a component of the counter-amphibious landing drills conducted in that area. For this effort, reservists attached to the ROC Army’s 109th infantry brigade, in tandem with civilian construction contractors, reportedly built a 100-meter long trench stocked with 30 days’ worth of supplies, and defended by artillery and machine gun emplacements.

While the training evolutions conducted during the annual Han Kuang exercise no doubt remain valuable for improving certain capabilities and facets of interoperability among Taiwan’s armed forces, there remain genuine concerns regarding the limited numbers of units involved, the short duration, and the heavily scripted nature of the exercise—and the ways in which Han Kuang therefore places only limited stress on the command structure, combat capabilities, logistical sustainment capacity, unit cohesion, and personnel proficiencies of the ROC military. An actual Chinese invasion would be a chaotic and bloody affair involving high casualties, materiel attrition, mass infrastructure damage, and surprise developments of the sort that cannot be captured in highly scripted exercise scenarios. As the capabilities of the PLA continue to grow year-upon-year, it will imperative for Taiwan’s MND to introduce more realistic and demanding training scenarios in order to maintain a credible defense.

The main point: The ROC armed forces conducted the live-maneuver portion of Han Kuang, Taiwan’s largest annual military exercise, from July 25-29. The exercise practiced many of the scenarios—such as civil defense, unit dispersal, and resistance to beach landings—that could be expected in the event of a Chinese invasion. However, the heavily scripted nature of the exercise limits its value in preparing Taiwan’s military personnel for an actual invasion.

[1] The 2021 Han Kuang exercise saw its live portion delayed from July until September due to continuing complications related to the COVID-19 pandemic, but this year’s exercise returned to a timetable more consistent with recent years.