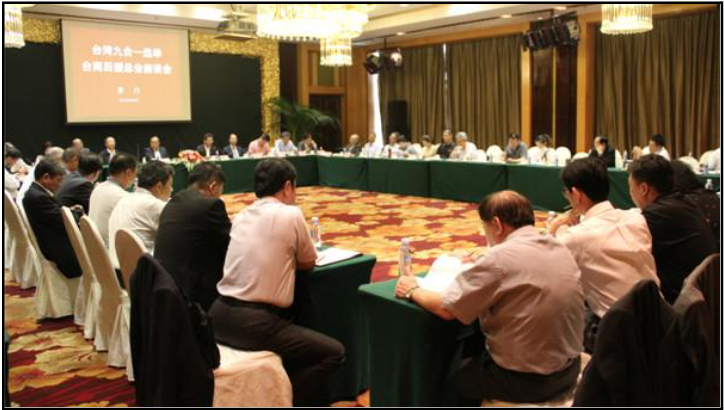 Edward J. Barss is the author of Chinese Election Interference in Taiwan and a China investigative research associate at Strategy Risks. The views in this article are the author’s own and are not intended to represent those of his affiliate organizations.

On October 4, 2007, the director of the Taiwan Affairs Office (TAO, 國務院台灣事務辦公室) warned Taiwan that “those who play with fire will get burnt” over the issue of holding a referendum on whether Taiwan should join the United Nations under its own name. Now, almost fifteen years later, Chinese Communist Party (CCP) General Secretary Xi Jinping (習近平) has issued the same threat to President Biden over Speaker of the House Nancy Pelosi’s recent visit to Taiwan. The CCP’s predilection for threatening foreign politicians for “interfering” in Taiwan affairs goes hand-in-hand with CCP claims of exclusive control over Taiwan’s domestic politics. Much of Taiwan’s strength on the world stage is derived from its robust democracy, but China’s demarches and manipulations over the years have significantly harmed Taiwan’s electoral processes. As a new round of local elections set to be held on November 26 draws near, a critical examination of the CCP’s past attempts to subvert Taiwan’s local elections becomes more relevant for determining Beijing’s strategy.

During the 2009 and 2010 local elections, following the Kuomintang (KMT, 國民黨)’s victory in the 2008 national elections, relations between China and Taiwan were relatively friendly. Even so, the CCP made several moves to interfere in the island’s domestic politics. First, China reduced hostile rhetoric approximately one month before the 2009 and 2010 elections. [1] Hostile rhetoric from the CCP can turn an election from a competition of ideas into a referendum on cross-Strait relations, which is why the CCP generally refrains from making public statements on Taiwan two weeks before national elections. As Dr. Kimberly Wynn Wilson’s recent study found, Taiwan’s political parties react strategically to foreign interventions, and hostile rhetoric from the CCP is frequently utilized to boost Democratic Progressive Party (DPP, 民進黨) voter turnout. [2] Second, the CCP used economic incentives to build political connections and showcase the benefits of the KMT’s conciliatory approach to China. For example, a month before the 2009 elections, several provincial governments, including those of Sichuan, Beijing, Guangzhou, and Jiangsu, sent large trade delegations to Taiwan. [3] Beijing also utilized Taishang (臺商, Taiwanese businesspeople working in China) to conduct interference. For instance, before the 2010, 2014, and 2018 local elections, the Association of Taiwan Investment Enterprises on the Mainland (ATIEM, 全國台灣同胞投資企業聯誼會), a TAO-run organization for Taishang in China, gave flight discounts to Taishang returning to Taiwan for voting. [4] At times, the ATIEM also included specific directives for voters: in 2010, for example, ATIEM leadership urged Taishang members to “exercise their democratic rights” and protect “cross-Strait peace.”

Finally, the CCP has targeted specific voting blocks in Taiwan. These actions included increasing the procurement of goods from ethnic minorities, and meetings with religious organizations and Taishang. [5] These methods of influence appear benign, but have proven effective at influencing voters. A 2016 paper examining the effects of the CCP’s targeted agricultural purchases on Taiwan’s voters found that purchases of this type often resulted in increased votes for the KMT, reduced voter participation, and an increase in invalidated protest votes in small towns. [6] Meetings with specific leaders and influence groups can also have an impact. For instance, in September 2010, then-Director of the TAO Wang Yi (王毅) met with the Taiwan Mazu Fellowship (台灣媽祖聯誼會)—a Taiwanese religious organization—and urged them to unite in order to oppose Taiwanese independence and uphold the “1992 Consensus” (九二共識).

Taiwan’s 2014 municipal elections followed pivotal changes in the cross-Strait situation. First, Xi Jinping had fully assumed control of the CCP, doing away with consensus-driven leadership and replacing it with a centralized, top-down decision-making process. Second, the Sunflower Student Movement held major protests against growing CCP influence in Taiwan, galvanizing public support for their cause. Sensing the sea change in political opinion in Taiwan and anticipating DPP gains, the CCP attempted to blunt the expected election results by relying on intimidation rather than enticements.

The CCP began by making threats that it would take away cross-Strait economic gains from Taiwan, framing the choice for voters as one between peaceful development or destabilization. Xi Jinping personally underlined this rhetoric on two occasions. First, he explicitly tied threats of retaliation to a DPP electoral win; and then, days before the election, called for the elimination of “interference” that led to difficulties in cross-Strait relations that year, such as the failure to ratify the Cross-Strait Service Trade Agreement. Additionally, the director of the TAO linked the continuation of the Shanghai-Taipei City Forum (上海-臺北城市論壇) with the results of the Taipei mayoral race. The CCP also bolstered support for pro-unification political parties in Taiwan by holding a meeting between Xi Jinping and approximately 20 pro-unification groups in September 2014. [7] The CCP further used its party-to-party contacts to hold meetings with influential political groups. For instance, in October 2014, the ATIEM held the “Taiwan’s Nine in One Election Taishang Support Meeting” (台灣九合一選舉台商後援總會座談會), in which the attendees included prominent KMT politicians such as Chiang Pin-kung (江丙坤), Lee Wo-shih (李沃士), and Chiang Shuo-p’ing (江碩平). Finally, the CCP attempted to legalize the “1992 Consensus” and the “One-China Principle” (一個中國原則) to mitigate the DPP’s ability to maneuver on cross-Strait issues and “criminalize” voter support for the DPP. [8]

The 2018 local elections became synonymous with CCP election interference in Taiwan, as China engaged in an extensive political interference campaign following the DPP’s win in the 2016 national elections. Beijing predicated its interference strategy on delegitimizing Taiwan’s national government while simultaneously boosting the KMT and other friendly political groups. [9] To start, the CCP held high-profile meetings with KMT leaders, local politicians, pro-unification groups, and media owners throughout the period before the elections. These meetings included political figures from around the country, including leaders from Hualien, Nantou, and Kinmen. [10] For example, in October 2018, a cross-Strait media delegation of over 100 reporters and 50 media organizations went to China for a forum on new media. The CCP also put further pressure on the Democratic Progressive Party (DPP, 民進黨) by increasing the number of military exercises, such as naval drills and fighter jet encirclement patrols, and releasing a statement from the Minister of National Defense stating that the People’s Liberation Army (PLA) would stop at nothing to prevent Taiwan’s “secession.” [11] The CCP blamed its military escalation on the DPP, accusing them of undermining cross-Strait peace. At the same time, the CCP systematically worked to cut off Taiwan from its diplomatic allies, starting in May with the Dominican Republic and ending in August with El Salvador. [12]

Beijing also launched an extensive campaign to influence voters through the use of economic incentives, disinformation, and local collaborators. Economic incentives designed to influence key voting demographics started in February 2018, when the CCP released the “Measures to Promote Economic and Cultural Exchanges and Cooperation with Taiwan” (關於促進兩岸經濟文化交流合作的若干措施)—also commonly known as the “31 Measures” (31條措施) policy—in an attempt to financially entice Taiwanese youth and businesses. The CCP also launched a disinformation campaign to shape voter attitudes, including operating content farms on Facebook and spreading false stories about President Tsai. [13] Taiwan’s Investigation Bureau (法務部) confirmed that it launched several investigations into the CCP illegally funding local election candidates at that time. In one instance, the Chinese Democratic People’s Party (CDPP, 中國民進黨), founded by Chang An-le (張安樂) and Zhou Qingjun (周慶峻), ran Zhang Xiuye (張秀葉) as a candidate in the Taipei municipal elections. Zhang was later sentenced to prison for using CCP funds to buy votes.

Over time, the CCP’s ability to interfere in Taiwan’s elections has grown more sophisticated, while also becoming more aggressive in response to shifts in domestic politics. CCP interference in local elections tends to be more extreme compared to its efforts to subvert national elections, often serving as a testing ground for election interference tactics. However, the passage of several laws and amendments designed to limit CCP influence in Taiwan, restrictions on cross-Strait travel due to the COVID-19 pandemic, and Beijing’s poor image, have all limited the CCP’s options for electoral interference. Economic measures, party contacts, and disinformation remain the most viable options for Beijing’s electoral interference activities.

However, several avenues for interference remain. One potential option includes economically punishing DPP counties while assisting KMT counties. However, while the CCP’s targeted purchases of Taiwan goods may improve voter support for the KMT, the opposite is not necessarily the case—and may only drive up turnout for incumbents in both parties. The CCP already appears to be trying to manipulate Taiwan’s elections through party contacts, such as KMT Vice Chairman Andrew Hsia’s August trip to China. The KMT’s August delegation trip to China has drawn criticism due to the CCP’s recent military exercises and accusations that the KMT is relying on funds from China to fuel its election campaigns.

Disinformation also remains an endemic threat to Taiwan’s elections and continues unabated. Recently, Taiwan’s Ministry of National Defense (中華民國國防部) recorded 272 disinformation attempts from August 1-8, launched in conjunction with China’s military exercises in the same period. Nevertheless, effective disinformation of this sort requires coordination with local political collaborators to avoid backfiring. Moreover, Taiwan’s government has grown more adept at dispelling disinformation. Beijing will continue to meddle in Taiwan’s local elections, but unless there is a significant change in tactics, the CCP is unlikely to see the success it wants.

Taiwan President Calls on Beijing to Acknowledge the ROC Exists