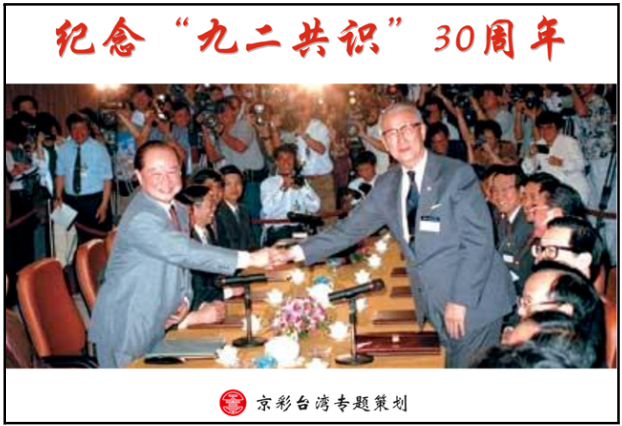 The so-called “1992 Consensus” (also “’92 Consensus,” 九二共識) has been a matter of recurring controversy within Taiwan politics for years, particularly as it pertains to relations between Taipei and Beijing. The term, reportedly coined by Kuomintang (KMT, 國民黨) official Su Chi (蘇起) in 2000, referred to the political legerdemain employed by KMT and Chinese Communist Party (CCP) officials in negotiations in the early 1990s, during which they reached a vague agreement that both Taiwan and the Chinese mainland belonged to “one China,” but with differing interpretations (一中各表) of that meaning—i.e., whether “China” referred to the Republic of China (ROC), or the People’s Republic of China (PRC). [1]

Taiwan’s current President Tsai Ing-wen (蔡英文) has rejected the formulation entirely on grounds of Beijing’s linking it with the “One Country, Two Systems” (一國兩制) blueprint for unification under PRC sovereignty. The KMT has explored ways to preserve the “1992 Consensus,” but has found the effort challenging: as recently as spring of last year, then-KMT Chairman Johnny Chiang (江啟臣) attempted to update the formulation to better fit Taiwan’s current circumstances—to include assertions of the need to uphold Taiwan’s democratic system and ROC sovereignty—only to encounter a stern rejection from Beijing.

For its part, the CCP continues to invoke the “1992 Consensus” as a vital component of any constructive engagement across the Taiwan Strait. However, in line with its increasingly hardline policy on Taiwan, the CCP has been attempting to redefine the “1992 Consensus” as an affirmation of PRC sovereignty over Taiwan. This effort was fully on display over the latter half of the summer, as the CCP hosted events and media commentaries to commemorate the supposed 30th anniversary of the “1992 Consensus”—with the CCP’s rigid interpretation of that “consensus” placed front and center.

In July and August, multiple events were hosted in the PRC that emphasized the anniversary theme. For example, on August 27, the annual gathering of the “Conference of Global Overseas Chinese for Promoting the Peaceful Reunification of China” (全球華僑華人促進中國和平統一大會)—a front organization linked to the CCP United Front Work Department (UFWD, 統戰工作部)—was convened in Chengdu. According to official media, the conference “was convened on the 30th anniversary of the ‘1992 Consensus,’ and its theme was ‘adhering to the One China Principle and the 1992 Consensus, creating together national unification and the great enterprise of national rejuvenation.’” In another example, the “1992 Consensus 30th Anniversary Academic Seminar” was convened in Beijing on August 30, with a reported 60 “cross-Strait experts and scholars” taking part in the event.

The most prominent of these events, however, was the “‘1992 Consensus’ 30th Anniversary Forum” (“九二共識”30周年座談會) convened on July 26 in Beijing’s Great Hall of the People. The meeting was officially chaired by You Quan (尤權), the director of the CCP United Front Work Department. However, the senior official present was Wang Yang (汪洋), who serves as the chairman of the Chinese People’s Political Consultative Conference (CPPCC, 中國人民政治協商會議)—and more importantly, as the member of the CCP Politburo Standing Committee with responsibility for the united front policy portfolio. In conjunction with his united front responsibilities, Wang is also the deputy director of the Taiwan Affairs Leading Small Group (TALSG, 中央對台工作領導小組), the party’s senior decision-making committee for Taiwan issues.

During the forum, Wang delivered a keynote address, which is worth quoting at length, as it lays out the essentials of Beijing’s new official interpretation. The crux of this updated position is that acceptance of the “1992 Consensus” equates to acceptance of the PRC’s “One-China Principle” (一個中國原則), which holds that the PRC is the one and only China, of which “Taiwan island” is a province. According to Wang, in 1992 the two sides had “reached a consensus […] that ‘both sides of the Taiwan Strait uphold the One-China Principle’—that is, the ‘1992 Consensus’” [emphasis added]. Wang then went on to say that:

The core idea of the “1992 Consensus” is that “the two sides of the strait belong to one China, [and both must] commonly strive for national reunification.” The historical significance of the “1992 Consensus” lies in the fact that it laid the political foundation for the development of cross-Strait relations. It is only with this political foundation that we are able to open up cross-Strait consultations and negotiations, move forward with cross-Strait exchanges [between] political parties, and establish institutionalized cross-Strait mechanisms for consultation and contacts between the two sides.

The practice of the past 30 years has enlightened us that the “One-China Principle” is [fundamental] for peace and stability in the Taiwan Strait and the peaceful development of cross-Strait relations. The reason why the “1992 Consensus” is important is that it has clearly defined the fundamental nature of cross-Strait relations: that the mainland and Taiwan belong to the same China, [and] the two sides of the strait [do not represent] state-to-state relations, [and neither are they] “one China, one Taiwan.”

Wang also took aim at Taiwan’s Democratic Progressive Party (DPP, 民主進步黨) for its alleged “separatism,” and went on to say that: “The DPP authorities challenge the ‘One-China Principle,’ refuse to recognize the ‘1992 Consensus,’ falsely claim that ‘neither is subordinate to the other,’ and conduct ‘de-Sinicization’ on a broad scale.” The criticism that Taiwan’s current ruling party refuses to recognize Taiwan’s “subordinate” status is particularly noteworthy, in that it further undercuts an unspoken assumption of the 1990s talks: that the two sides could engage in negotiations on terms of parity.

While much of Wang’s speech continued in this heavy-handed vein, there was one noteworthy point where he appeared to offer a carrot alongside the rhetorical sticks. At one point in the speech, Wang further commented on the importance of accepting the “1992 Consensus” by stating: “It is only with this political foundation that Taiwan’s participation in the World Health Assembly, the International Civil Aviation Conference, and the activities of other such international organizations could be fair and reasonably arranged.” Wang thereby seemed to dangle an implicit offer that Beijing might drop its rigid opposition to Taipei’s membership in such international organizations, in exchange for Taipei’s embrace of the “1992 Consensus”—and with it, Beijing’s “One-China Principle.”

Lest Wang’s speech be taken as a one-off, it has been buttressed by other material in official PRC media in August and September. One of the most prominent—and provocative—examples of this was a leading editorial published on September 10 in a spin-off magazine of the People’s Political Consultative News (人民政協報), a newspaper published by the Central Committee of the Chinese People’s Political Consultative Conference, the leading public institution of the CCP United Front Work Department. Titled “Thoroughly Reform, the ‘1992 Consensus’ Must Not Be Distorted” (正本清源, “九二共識”不容歪曲), the editorial drove home in no uncertain terms the PRC’s new and uncompromising position on the “1992 Consensus.”

As stated in the editorial, “In 1992, with the authorization of both sides of the strait, the Association for Relations Across the Taiwan Strait (ARATS, 海峽兩岸關係協會) and Taiwan’s Straits Exchange Foundation (SEF, 海峽交流基金會) reached a consensus […] that ‘both sides of the strait uphold the One-China Principle.’ The core essential point of this is that ‘both sides of the strait belong to one China and will make joint efforts to seek national reunification.’” Per the editorial, however, a political shift has since occurred in Taiwan, brought about by “the unceasing infiltration of the interference of foreign forces.” As a result, the meaning of the “1992 Consensus” has become “distorted” (歪曲). The editorial goes on to state that:

In regards to the “1992 Consensus,” for a long time on Taiwan island it has been understood as “One China, Different Interpretations,” meaning that both sides acknowledge that they belong to one China, but that in this understanding, the Taiwan side interpreted it as “The Republic of China.” In recent years, at high levels the KMT has sought to change the subject mid-argument, and when referring to the “1992 Consensus,” has taken steps towards calling it the “One China, Differing Interpretations 1992 Consensus.” […]

All of this is wrong, the editorial insists, and sums up its core message in one sentence: “In the ‘1992 Consensus’ there is only ‘One China’—there are no ‘different interpretations’” (“九二共識”只有“一中”沒有“各表”) [emphasis added].

In its propaganda campaign to commemorate the supposed 30th anniversary of the “1992 Consensus,” the CCP is now staking out the position that the tacit agreement, from its very beginnings, represented acceptance of Beijing’s “One-China Principle.” In turn, this implies that the PRC is the one and only Chinese state in the world, and that Taiwan is a subordinate region of the PRC. While Beijing is accusing both of Taiwan’s major political parties of backtracking on a past commitment, it is Beijing that is now attempting to impose a post facto reinterpretation on a formulation that was always meant to be studiously vague—an act of rhetorical legerdemain that allowed negotiators from the two sides to sidestep thorny issues of sovereignty.

Beijing’s revisionist and rigid position now invalidates the entire concept of the “1992 Consensus” as a basis for cross-Strait engagement. With the exception of marginalized figures from the pro-unification fringe of Taiwan politics, the idea of blindly embracing PRC sovereignty is politically dead on arrival in Taiwan. Furthermore, the PRC’s new position undercuts the entire concept of cross-Strait negotiations being conducted on any sort of equal basis. As intended, such an assertion reduces Taiwan to a dependency, with no agency in determining its own future. Alongside the provocative military activity of summer 2022 and Beijing’s shrill “wolf warrior” diplomacy, this latest propaganda campaign is yet another sign of the increasingly hardline Taiwan policy of the CCP central leadership under Xi Jinping (習近平). If Xi, as expected, further tightens his grip over the party apparatus at the 20th Party Congress in October, this summer’s developments will likely prove to be harbingers of even harder-line measures to come.

The main point: During and after a series of events commemorating the 30th anniversary of the so-called “1992 Consensus,” CCP officials have worked to redefine the previously vague agreement as representing acceptance of PRC sovereignty over Taiwan. This new, much more rigid interpretation could serve as a harbinger of harsher PRC policy toward Taiwan in the future.