Bonnie Glick is the inaugural director of the Krach Institute for Tech Diplomacy at Purdue, a senior advisor at the Center for Strategic and International Studies, and a fellow in Harvard’s Institute of Politics.
Tags
A Revamped Taiwanese Approach to Foreign Assistance

As Taiwan undertakes a review of its foreign assistance, there are some ways it can take advantage of its key differentiators as a donor while also aligning its foreign assistance with other allied and like-minded donor nations. Amplifying its global profile as a donor will help Taipei share the important story of its own journey to self-reliance with the rest of the world.

The United States is the largest bilateral donor in the world, investing over USD $40 billion per year globally. Some, myself included, would argue that the United States should see a return on that investment in the form of improved and enhanced relations with the countries it assists. After all, every dollar of US assistance comes from American taxpayers. Conditioning US assistance on political support for the United States and its priorities—for example, at the United Nations—is generally not an idea at play in US foreign policy-making circles. America and Americans are generous, and traditionally give without expecting so much as a “thank you.”

That is all well and good, but perhaps our choice to refrain from tying assistance to geopolitical support is a mistake that should not be repeated by Taiwan.

Taiwan does not have the benefit of formal diplomatic relations with many countries. Yet, its informal relations—through economic and financial markets, educational exchanges, and people-to-people familiarity, as well as its foreign assistance—are all very important foreign policy tools. The lion’s share of Taiwan’s foreign assistance is in the form of technical assistance or capacity building. In plain language, that comes down to training: specialized technical training, vocational training, agriculture training, etc. Particular areas in which Taiwan excels in technical assistance include health, agriculture, and of course, technology and engineering.

Taiwan deploys experts and immense assistance to developing countries to help them build their own futures. The United States does this as well. While these programs are very important, I would posit that Taipei should look at some additional ways of crafting its development assistance programs that include more direct amplification of Taiwan’s sponsorship and involvement. Taipei might think of it as planting a Tawanese flag everywhere that Taiwan has an impact.

For many developing countries, Taiwan represents a tremendous success story, due to the hard work and the investment of its population in its early decades after 1949. This is also due to excellent stewardship in its management of the small amount of foreign assistance it received from the United States and other donors in the 1950s, which helped fuel its growth. Today, it is one of the wealthiest, freest, and largest economies (in terms of GDP) in the world. The “Taiwan Success Story” is one that should be amplified and heralded to its allies, as well as to potential diplomatic partners. It exemplifies the “journey to self-reliance” for which donors have long advocated. 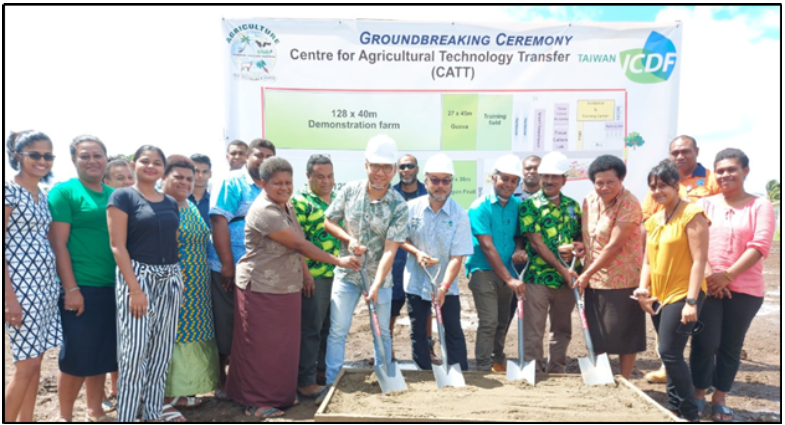 Image: The groundbreaking ceremony for the Taiwan-sponsored Center for Agricultural Technology Transfer in Nausori, Fiji on February 15, 2021. (Image source: Facebook)

In the past, Taiwan has been loath to tout its success. Why? Perhaps Taiwan is concerned about looking vulnerable to countries with which it does not have formal diplomatic relations. But I would argue that raising the Taiwanese flag alerts countries that Taiwan is there as a partner, friend, and supporter. Additionally, monetary contributions from Taiwanese taxpayers have value, and that value should be acknowledged.

The list of countries with which Taiwan has informal relations is far longer than the list of countries with which it has formal relations, but soft diplomacy is the way to transform those relationships. Taiwan’s people-to-people engagement around the world is an important tool for winning friends and courting others. Students, especially those from emerging markets, are eager to study abroad, learning from professors and practitioners in successful countries. The People’s Republic of China (PRC) offers countless scholarships to woo students to its universities; Taiwan should do the same thing, in larger numbers. Nearly 150,000 international students study in Taiwan’s excellent universities. These students are ready-made goodwill ambassadors for Taiwan back in their home countries, because they have gotten to know more about their fields of study—and also about the Taiwanese people and culture. Scholarship opportunities will increase those numbers and build more people-to-people relationships over time. As those students become leaders, this will build stronger and stronger bilateral bridges for Taiwan out to the world.

Taipei has recently focused on expanding its relations with countries across the Indo-Pacific region: this includes the Pacific Islands, but it also includes countries in the Association of Southeast Asian Nations (ASEAN), India, and Australia. Taiwan refers to this as its “New Southbound Policy” (新南向政策). Enhanced investment in trade and capacity building across these countries will build even stronger ties in bilateral relations, as the countries will have “skin in the game.”

The particular genius of the New Southbound Policy is that in building these stronger ties, Taiwan increases the likelihood of its being accepted as an observer into more international organizations. China’s withering efforts to cow countries into ostracizing Taiwan is harder to do when personal relations, trade relations, and educational relations have been built. When people-to-people relations are formed, they are harder to break.

Taking Credit and Standing Out

Given Taiwan’s occasional reluctance to stand out in the crowd for fear of drawing attention and ire from Beijing, partnering with the United States and other like-minded and allied countries to showcase Taiwan’s development assistance can be amplified through joint programs and co-financing—and most important of all, co-branding. These are all ways in which Taiwan can gain prominence with a bit of a defensive shield from its development partners. The Taiwanese flag can and should be recognized and recognizable worldwide, and by partnering with the United States, the European Union, OECD countries, and other allies, the message of Taiwanese foreign assistance can go even farther. Joint press conferences should be pro forma, with all participants speaking (including the beneficiary countries). This will solidify in the minds of the leaders of developing countries that Taiwan is a genuine partner in their nations’ development journeys.

There was a recent controversy when international media reported that President of Paraguay Mario Abdo Benítez announced that Paraguay expected Taiwan to provide USD $1 billion in foreign assistance, or else the country would consider transferring its diplomatic recognition to Beijing. While the government in Asunción was ultimately shamed over its alleged demand, it serves to demonstrate the potentially precarious nature of Taiwan’s global engagement in the face of competition from China. The alleged request from Paraguay of USD $1 billion would amount to double Taiwan’s overall development assistance budget of approximately USD $500 million.

My initial response to the media reports was that Taiwan’s ambassador in Paraguay should reach out to the American ambassador and should undertake an immediate, joint program with broad outreach, flying all three countries’ red, white, and blue flags. The nature of the joint program would certainly make local and regional media, and the partnership with the United States would amplify it still further.

A joint program a là Paraguay could equally be undertaken in the Pacific Islands with joint collaboration and co-financing, as well as co-branding, with Australia and possibly New Zealand. Outreach to like-minded OECD countries can elevate Taiwan’s foreign assistance from purely bilateral and “under the radar,” to a position of global collaboration and partnership.

Additionally, global collaboration is a key way to differentiate Taiwan’s programs from the so-called assistance offered by the PRC. China’s Belt and Road Initiative (BRI, formerly known as “One Belt, One Road,” [一帶一路]) has long been described in the United States as “debt trap diplomacy.” Taiwan’s assistance, on the other hand, is designed to help countries develop and participate in the global economy.

Nothing attracts a crowd like a crowd. Forming crowds around development highlights Taiwan’s generous assistance, and could also lead Taiwan to consider increasing its current budgetary outlay of foreign aid. The “bang for the buck” for Taiwan has to be demonstrated, but once it is, Taipei may see the benefit of increasing its global contributions. The virtuous upward cycle—and Taiwan’s enhanced public image—could also lead to more forceful calls for Taiwan to receive observer status in international organizations such as the World Health Assembly and the UN Framework Convention on Climate Change.

Taiwan’s strategic use of foreign assistance as a tool of soft diplomacy, along with more people-to-people engagements, can enhance Taiwan’s position as a global donor. Taiwan’s media channels can also be enlisted to broadcast widely the cooperation through outlets such as Radio Taiwan International (RTI, 中央廣播電台). As argued in a recent piece by Dan Runde, my colleague from the Center for Strategic and International Studies (CSIS), Taiwan should increase its foreign aid dramatically as Taipei reviews its current soft diplomacy footprint. He is right. This is an opportunity to engage on the world stage, alongside allies and partners, that will serve the longer-term benefit of improving Taiwan’s self-defense posture. Soft diplomacy, foreign assistance, and enhanced people-to-people relations are all less expensive than defense spending—and they could result in rewards that are important and separate from military capabilities, while simultaneously proving themselves complementary.

The main point: While Taiwan’s foreign assistance programs have been very effective, Taipei should do more to publicize its efforts. In doing so, it could strengthen its soft diplomatic influence, and expand its informal relationships with nations around the world.

What EU’s Next Foreign Policy Head May Mean for Taiwan

The Implications of the Three Warfares for Taiwan (Part 1)

By:
Elsa B. Kania
Continue Reading