Domestic politics will consume much of the national agenda in Taiwan in 2023. In January 2024, the island democracy will hold its presidential and legislative elections, which will determine which leader and political party will steer the course of the country’s politics and foreign relations for the next four years. The leader—as well as the party—that wins these consequential races will shape the nation’s policy and play a major role in guiding cross-Strait relations, which in turn could have profound regional and global implications. What are the factors that will influence the outcomes in 2024? Moreover, what are the underlying political attitudes that will determine which leader and party will prevail in 2024?

While it is still early on in these races, the primary indicators that observers will be watching are: the support ratings for the potential candidates; developments within the political parties themselves; and trends in the underlying political attitudes of Taiwan’s voters. Currently, both the Democratic Progressive Party (DPP, 民進黨) and the Kuomintang (KMT, 國民黨) base their presidential primary processes on public opinion surveys. Thus, these polls could become the determining factor for the presidential candidates of the parties and will certainly play a crucial role in shaping the next presidential race. Four recent polls—by My Formosa Weekly (美麗島電子報), the TVBS Polling Center (TVBS, 民調中心), the Taiwanese Public Opinion Foundation (TPOF, 台灣民意基金會), and ET Today (民調雲)—have asked who voters support or hopes to become the next president.

While the parties will not officially hold their primaries for another few months, some of the likely names on the ballots are already clear. For the ruling DPP, it is probable that Vice President Lai Ching-te (賴淸德)—who recently took over as chairman of the DPP after Tsai Ing-wen (蔡英文) stepped down to take responsibility for the party’s defeat in the November “nine-in-one” local elections—will be nominated as the DPP’s presidential candidate. The KMT’s candidate, however, is much less certain. Although polls indicate that the KMT’s most-electable candidate is New Taipei City Mayor Hou You-yi (侯友宜), there is no strong indication whether the popular and recently re-elected mayor of the most populous city on the island would even want to run for the nation’s top political post. On the other hand, KMT Chairman Eric Chu (朱立倫), who led the party to a victory over the DPP in the recent local elections, in all likelihood wants to run. However, it is unclear whether Chu could actually win his own party’s presidential primary.

A wildcard in the KMT’s primary is billionaire Terry Gou (郭台銘). The Blue-leaning TVBS poll has Gou beating Lai 34 percent to 25 percent, whereas the Taiwan People’s Party’s (TPP, 台灣民眾黨) Ko Wen-je (柯文哲) came in third at 20 percent. In a two-way race, the poll also has Gou beating Lai 47 percent to 34 percent. The TVBS poll also found that 30 percent of respondents believe Gou would be the most capable candidate in handling cross-Strait relations, followed by Lai with 17 percent and Hou in third at 11 percent. Gou previously ran in the KMT’s 2019 primary and lost, after which he left the party (for the second time). There is mounting speculation that he is interested in running again for the top post, although it is not clear whether it might be on the KMT’s ticket or as an independent.

Although these polls should be viewed as having only marginal predictive value in terms of who will ultimately win the presidential race in 2024, what they do show is that there is no clear front runner among the possible candidates at this time. Moreover, they demonstrate that if the presidential election were to be held tomorrow, the candidate that the KMT chooses could make a significant difference in the party’s chances. For instance, according to these polling figures alone, the party’s decision between Eric Chu and Hou You-yi could potentially make the difference of the party winning or losing in 2024.

Another factor that could provide insights on how voters may cast their vote would be their party affiliation and levels of satisfaction. Although party support tends to vary significantly from poll to poll, party identification with the DPP has remained steady over the past year. By contrast, despite its electoral successes in the local elections, the KMT has actually seen a decrease in party identification in at least one of the polls. It should be noted that the My Formosa poll does not ask respondents their party identification, but rather gauges positive and negative feelings about the two parties—with the percentage reflecting people responding positively about the party and negatively about the other party.

The discrepancies in these polling results reflect the difficulty in obtaining consistent and reliable party identification data. Yet, according to longer-term polling on party identification conducted by National Chengchi University’s Election Study Center (國立政治大學 選舉研究中心) released in January 2023, party identification with the DPP still remains highest among the three parties at 30.8 percent (followed by the KMT at 14.4 percent, and the TPP at 8.2 percent). Notably, the poll found that a sizeable proportion of respondents (45.6 percent) identified as independent or provided no response. Interestingly, the poll shows that despite its victory in the November 2022 local elections, party identification with the KMT actually fell when compared to the previous year (17.1 percent), which was itself a significant drop from 2019 (24.1 percent). This suggests that the KMT’s victory in the local elections may have been more of a vote against the DPP than a vote for the KMT, although these dynamics could change in the lead up to the 2024 race. It is interesting to point out that party identification historically has a strong correlation with electoral victory in the presidential race, with the party that has the higher support rating winning the presidential race in all of the seven direct presidential elections held since 1996. 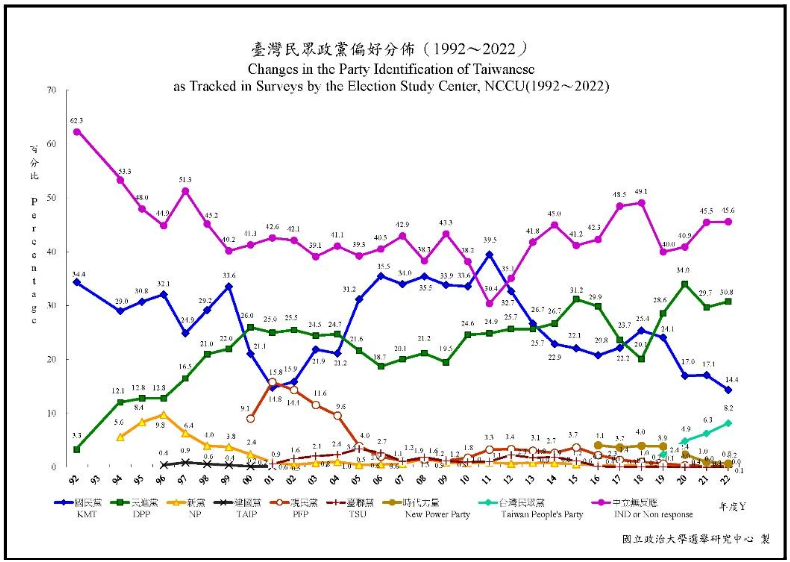 Graphic: Levels of support for Taiwanese political parties (as indicated by sense of party affiliation), from the years 1992-2022. (Graphic source: NCCU-Election Study Center)

Another factor that tends to weigh on a national election—and less so in the local elections—is the impact on voters’ views of cross-Strait relations. In this regard, both the broader and more specific underlying political attitudes of voters have remained relatively unchanged for some time, with an overwhelming majority (88.6 percent) still preferring to maintain some form of the “status quo” (up from 86.9 percent in 2019). Meanwhile, the percentage of respondents preferring to maintain the status quo, then move towards independence, held steady at 25.4 percent (up from 21.8 percent in 2019); while the percentage of those preferring to maintain the status quo fell slightly to six percent (from 7.5 percent in 2019). The percentages of the population that would prefer either independence as soon as possible or unification as soon as possible both remain low, at 4.6 percent and 1.2 percent, respectively (5.1 percent and 1.4 percent, respectively, in 2019).

Finally, national identity is another factor that matters—less for predicting which candidate voters will choose but more in terms of how it influences how the parties ideologically orient themselves in order to win the presidential election. In this respect, there has not been any significant variation in the national identity of voters since 2019, with 60.8 percent of respondents identifying exclusively as Taiwanese (up from 58.5 percent); 32.9 percent identifying as both Taiwanese and Chinese (down from 34.7 percent); and only 2.7 percent identifying exclusively as Chinese (down from 3.5 percent).

Coming off the heels of its electoral victory over the DPP in the November local elections, the KMT made additional gains in several special by-elections that have helped to build on its momentum. Nevertheless, the KMT still has a steep hill to climb. The party will obviously aim to build on its electoral success in the local elections, but the presidential election is a different type of race with different sets of issues. Furthermore, it could potentially be affected by a complicated primary process. With no clear frontrunner in the races, and with support for the DPP remaining relatively high, the results are far from assured.

Another factor is the TPP. It is worth pointing out that in a two-way race between Lai and Hou, TPP voters overwhelmingly favor the KMT over the DPP (77 percent versus 21.1 percent), showing that the party’s voters lean more “blue” than “green.” Whereas TPP voters cast more ballots for Tsai Ing-wen than Han Kuo-yu in 2020 (33.3 percent versus 21.2 percent), they may turn more to the KMT in 2024, especially if Hou is the KMT’s candidate. These polls also show that Ko remains popular among the public, suggesting that he could become a potential kingmaker in the presidential race. Although the TPP may not necessarily have the organization to execute a nationwide presidential race, Ko could very well make the difference for either the DPP or KMT—either by supporting one party’s candidate over the other, or else forming some sort of joint ticket.

Indeed, there are complex domestic political dynamics at play in Taiwan’s upcoming presidential and legislative elections. While the current political momentum is behind the KMT, as Jessica Drun of the Atlantic Council noted, “the course of Taiwan politics will move in line with the trends of Taiwan identity,” and “identity politics are trending toward a much larger swathe of pan-green support.” With no clear favorites and Lai shifting his cross-Strait policies closer to a moderate stance by explicitly committing to continue the policies of Tsai, the results of the election could depend less on what the major parties do, and more on what Beijing does—or perhaps even more importantly, does not do.

The main point: As Taiwan enters 2023, the 2024 presidential and legislative elections are likely to increasingly take center stage. While the KMT is currently in a strong position following its victory in the November 2022 local elections, it faces challenges due to its lack of a consensus candidate, as well as growing trends in party affiliation and national identity.