Congress continues to act as a bastion of support for the US-Taiwan relationship. Just this week, Senator Tom Cotton (R-AR), along with Senators Robert Menendez (D-NJ), Marco Rubio (R-FL), Ted Cruz (R-TX), Catherine Cortez Masto (D-NV), and Chris Coons (D-DE) introduced the Taiwan Assurance Act. The bipartisan bill, unveiled in advance of the Taiwan Relations Act’s 40th anniversary in April, takes note of the “close relationship” between Taiwan and the United States and of that relationship’s “enormous benefit to both parties and to the Indo-Pacific region as a whole.” It also takes note of China’s ongoing efforts to isolate, intimidate, and otherwise threaten the island.

Non-binding language in the Taiwan Assurance Act calls for “regular transfers of defense articles to Taiwan,” resumption of trade and investment talks “with the goal of reaching a bilateral free trade agreement,” and US advocacy for Taiwan’s “meaningful participation” in international organizations. Binding language mandates that the defense attaché at the American Institute in Taiwan be a general or flag officer and requires the secretary of defense to “make efforts to include Taiwanese forces in bilateral and multilateral military exercises.” This latter provision marks a step beyond previous legislation that described the “sense of Congress” as supporting Taiwan’s inclusion in such exercises.

The Taiwan Assurance Act requires that the president submits to the House and Senate foreign affairs committees a report on the results of a State Department review of its Guidelines on Relations with Taiwan and on implementation of the Taiwan Travel Act. The Act encourages, but does not mandate, that the State Department guidelines “be crafted with the intent to deepen and expand United States-Taiwan relations,” in accord with “the reality that Taiwan is governed by a representative democratic government … and that Taiwan is a free and open society that respects universal human rights and democratic values,” and “be consistent with the longstanding, comprehensive, strategic, and values-based relationship.”

Senator Cotton here aims to bring about a revision of the State Department guidelines, which have long inhibited smooth bilateral relations. That State Department officials cannot meet Taiwan counterparts in executive office buildings is an inconvenience that, one imagines, must have at times deterred such meetings. Refusal to treat visiting Taiwan dignitaries with the formalities and honors granted other foreign visitors denies them dignity without meaningfully advancing US interests in Asia. Ensuring that Taiwan’s foreign and defense ministers do not step foot in Washington, DC—indeed, keeping them outside the Beltway entirely—denies American senior national security officials opportunities to engage with counterparts from a country with whom the United States could one day conceivably fight alongside in a conflict with a rival nuclear power.

The Cotton bill builds upon other legislation that relates to Taiwan.

Last month, Senator Marco Rubio introduced the Countering the Chinese Government and Communist Party’s Political Influence Operations Act. While the act is primarily concerned with countering malign People Republic of China’s (PRC) influence in the United States, it does describe US policy as, in part, “to enhance cooperation and coordination with Australia, Canada, New Zealand, and Taiwan … whose governments and institutions have faced acute pressure from the political influence operations of the Government of China and the Communist Party of China.” This language not only recognizes the severe challenge Taiwan faces, but also treats Taiwan as no different from countries with which the United States has official diplomatic relations.

Taken together, a number of acts in recent years—notably the national defense authorization acts, the Taiwan Travel Act, and the Asia Reassurance Initiative Act (ARIA)—have put the US-Taiwan relationship on firmer footing, pushing it towards a more normal relationship.

In 2017, when Senator Cory Gardner first announced his intention to introduce ARIA, he promised that the bill would “unequivocally back Taiwan as our important security partner, including authorizing new arms sales and providing for enhanced diplomatic contacts in Taipei.” The senator delivered on that promise. ARIA, which President Trump signed into law in late 2018, listed Taiwan among America’s most important security partners in Asia, a list that includes US treaty allies. The act reaffirmed US commitment to Taiwan in the economic, diplomatic, and security realms; called for regular arms sales to Taiwan; and encouraged “the travel of high level United States officials to Taiwan, in accordance with the Taiwan Travel Act.”

Senator Gardner further reinforced this commitment in a speech at a joint Global Taiwan Institute-Project 2049 Institute event earlier this month. The congressional view on US-Taiwan relations, Gardner said, “is that the United States must consistently grow our relationship with Taipei.” Perhaps even more ambitiously, “we must pursue every available avenue of cooperation with Taipei allowable under US law.” Indeed, there is not actually much activity that US law disallows when it comes to US-Taiwan cooperation. To whit, in February, Gardner, Cotton, and three other senators addressed a letter to Speaker of the House Nancy Pelosi encouraging her to invite Taiwan President Tsai Ing-wen to address a joint session of Congress. Such an invitation, while unlikely, would be unprecedented but entirely consistent with US law and, arguably, with the American “One China” policy as well.

None of this is to say that Senators Rubio, Cotton, and Gardner or others on Capitol Hill are seeking to re-establish diplomatic relations between the United States and the Republic of China (as Taiwan is officially known). Indeed, both ARIA and the Taiwan Assurance Act note that relations with Taipei should be handled in accordance with the Three Joint Communiqués (in the former) and the “One China” policy (in the latter). Rather, they want Washington to treat, and engage with, Taipei much as it would any other diplomatic partner.

A more normal relationship with Taiwan has both symbolic and substantial value. Treating Taiwan as a normal diplomatic partner—as the United States did last week when its ambassador to Palau met with Taiwan President Tsai Ing-wen during her visit there—underscores American commitment to the island’s continuing de facto independence and can help to dispel doubts in Beijing that Washington would actually go to Taipei’s aide in the event of a crisis. As things stand, strategic ambiguity may be more ambiguous than Washington currently intends.

Loosening of the State Department’s Taiwan guidelines would allow for regular, high-level discussions between Taiwan and American national security officials. American men and women may one day be asked to put their lives on the line to defend Taiwan—that senior American leaders, including the president, do not engage with their counterparts in Taipei is a travesty. In carrying out such engagement, American leaders would better keep faith with American soldiers, sailors, marines, and airmen. American leaders would, moreover, develop a deeper understanding of how Taiwan’s leaders might react in the event of a crisis, and vice versa, thus making for better crisis management. Finally, direct engagement on contingency planning at the highest levels of government would enhance confidence in both capitals—and in Beijing—that those plans would be executed in the event of an emergency.

The United States should not let precedent inhibit its interactions with Taiwan. Rather, it can and should move deliberately, but consistently, towards a more normal relationship with Taiwan. There is much that Washington can do within the framework of the “One China” policy, but there is no need to do it all at once. Washington should not be overly sympathetic to Chinese claims of “hurt feelings,” but avoiding surprises is important for the maintenance of a relatively stable, predictable US-China relationship.

The Trump administration is remarkably friendly to Taiwan, but it is Congress that has continued to drive progress in the relationship. That is likely to remain so through 2020 and beyond. Importantly, support for Taiwan in Congress is and has long been bipartisan. The “Countering the Chinese Government and Communist Party’s Political Influence Operations Act” had two democratic co-sponsors, including the ranking member of the foreign relations committee’s Subcommittee on East Asia, the Pacific, and International Cybersecurity Policy. Half of ARIA’s co-sponsors were Democrats, including former vice presidential nominee Senator Tim Kaine (D-VA). Bipartisan action may seem uncommon in today’s Washington, but it is the norm when it comes to legislation supporting Taiwan and US-Taiwan relations.

Members of both parties can be expected to continue exploring ways to deepen bilateral relations during the remainder of the Trump administration’s first term. Look for members of the armed services committees to continue encouraging closer defense and military-to-military ties. Related, it would be relatively non-controversial, but helpful, for the foreign affairs committees to advance legislation requiring the secretary of state to respond to letters of request for arms sales within a defined time limit. Congressional advocacy for a free trade agreement is possible, too, though it will, of course, be up to the executive branch to negotiate any such deal.

To be sure, the Trump administration deserves credit for advancing US-Taiwan ties over the last two years. It is Congress, however, that remains at the forefront of an ongoing effort to shape a more normal bilateral relationship. That congressional leadership will be vital if the relationship is to continue flourishing in the years ahead.

The main point: Congress remains a bastion of support for US-Taiwan relations and is providing important leadership in shaping that relationship for a new era. 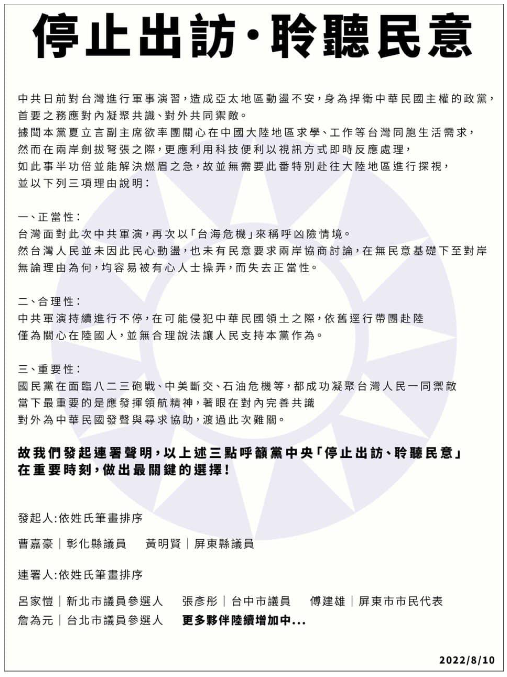