Among the multifaceted military threats directed at Taiwan by the People’s Republic of China (PRC), none is more immediate and pressing than the provocative military flight activity around Taiwan by People’s Liberation Army Air Force (PLAAF) aircraft. This activity—which includes not only near-daily incursions into Taiwan’s Air Defense Identification Zone (ADIZ), but also flights around the island and across the Taiwan Strait centerline—began to ramp up dramatically beginning in 2019 and 2020 (see here and here). In the first week of October 2020, Taiwan’s then-Minister of National Defense Yen Teh-fa (嚴德發) stated that, in the year up to that time, the PLA had conducted over 1,700 sorties into the ADIZ and crossed the Taiwan Strait centerline 49 times. The Republic of China Air Force (ROCAF) has faced mounting pressures on aircraft maintenance and budgets as a result of the need to respond to these PLAAF incursions: in September 2021, a Ministry of National Defense (MND) report indicated that the ROCAF’s facilities and equipment costs were projected to reach a record NTD $29.2 billion (USD $1.05 billion) in fiscal year 2022—including NTD $17.2 billion for maintenance and NTD $11.9 billion for equipment purchases (up 56 percent from fiscal year 2016).

Policy discussions surrounding Taiwan’s air defense were also given a jolt by an incident on February 5, in which a Chinese civilian Y-12 turboprop aircraft—reportedly flying low to the ground, possibly with intent to fly under radar coverage and thereby test Taiwan’s air defense network—flew near Dongyin Island in the Matsu archipelago. In the wake of the incident, an MND spokesman stated that “we cannot rule out that [China is] using civilian aircraft to test the responses of our military.” Some commentators in Taiwan called the incident a “wake-up call,” emphasizing the need to upgrade Taiwan’s air defenses.

In addition to the constant pressure posed by PRC flights—in terms of both quotidian ROCAF responses such as scrambles by escort fighters, as well as what the PLAAF flights might portend for further coercive PRC military activity—Russia’s invasion of Ukraine has prompted further discussion of the obvious parallels between Taiwan and Ukraine, as well how Taiwan’s air defense capacity connects to its overall capability for self-defense. Some observers have drawn a direct line between the experiences of the Russo-Ukrainian War and the threat faced by Taiwan. For example, Harry Halem and Eyck Freymann have written that “Taiwan could benefit from a similar asymmetric defense strategy to deter or defeat a Chinese invasion […] But this strategy will fail if Taiwan cannot disrupt Chinese air control. […] [I]nitial analysis suggests that Ukrainian air defenses have been critical in ensuring the country’s survival and allowing its military to operate effectively.”

In 2021 and early 2022, Taiwan’s MND has taken a series of steps to boost the island’s air defense capacity in the face of steadily mounting PRC pressure. These measures consist of both foreign equipment purchases and ramped-up indigenous defense production, as well as new equipment deployments and a review of procedures for the tracking of PLAAF sorties. These measures in turn bear direct relation to Taiwan’s ability to defend itself against still more aggressive coercive actions by the PRC.

The pressure from the PRC is likely responsible, at least in part, for institutional changes in the ways that Taiwan’s military handles the tracking and interception of potentially hostile aircraft. Although primary responsibility for air defense rests with the ROCAF, Taiwan’s MND has indicated that it has adopted a joint approach to air defense management. As indicated in the ROC National Defense Report 2021 (中華民國110年國防報告書) issued in November 2021:

To enhance the [command-and-control, C2] efficacy for joint operations and the protection for short-range air defense forces, the MND has completed the “integrated air defense concept” to combine short-range air defense forces from 3 service branches and [to] give the headquarters of each theater of operations C2 authority to employ [common operational pictures] and a communications mechanism with air and naval assets to increase the reaction time for forces on alert and the efficacy of our joint operations. By this token, we may flatten our command hierarchy, and achieve cross-domain integration for these forces.

The increase in PRC flight activity in 2019-2020 led to a corresponding increase in scrambles by ROCAF fighters to monitor and escort the PLAAF aircraft. This has led Taiwanese defense officials to reportedly request expedited delivery (currently scheduled by 2026) of the 66 F-16 C/D Block 70 fighters approved for sale by the United States in 2019. While airborne scrambles have continued, however, by March 2021 the stress on ROCAF pilots and maintenance requirements had led Deputy Defense Minister Chang Che-ping (張哲平) to comment that that “land-based missile forces” had become the primary means to track and monitor PLAAF flights.

The past year has also seen discussion regarding further upgrades of radar facilities to bolster Taiwan’s early-warning and tracking capabilities. The current jewel in the crown of Taiwan’s early-warning network is the “Precision Acquisition Vehicle Entry Phased Array Warning System” (PAVE PAWS) radar facility located atop Leshan Mountain in northwestern Taiwan. The PAVE PAWS system, built by US defense contractor Raytheon for a reported USD $1.4 billion, entered service in 2013 and allows for 240 degree tracking of targets out to an estimated range of 3,000 miles. Press reporting in April 2021 indicated that MND officials were giving serious consideration to the construction of another major early-warning radar facility in the south of Taiwan, in order to better facilitate tracking of PLAAF aircraft flying into Taiwan’s ADIZ or through the Bashi Channel south of Taiwan. However, further specifics on this potential new facility have not been made public.

There have also been recent deployments of smaller, mobile platforms to outlying islands around Taiwan. For example, in March 2021 Taiwan’s Youth Daily News (青年日報) published photos of a vehicle-mounted radar system, reportedly a passive radar system intended to track stealth aircraft, being deployed to Penghu Island—a key location in the Taiwan Strait for monitoring flights into Taiwan’s ADIZ. Increased PLAAF activity has also prompted similar actions by Japan: in early April, a TPS-102 (a vehicle-mounted, three-dimensional air surveillance radar) and 20 accompanying Japanese Air Self-Defense Force (JASDF) personnel were deployed to Yonaguni Island, approximately 70 miles to the east of Taiwan. A Japanese military spokesman commented that the move was intended to “strengthen the defense of our country at a time when neighboring countries are increasing their activities [in the region].”

In recent years, Taiwan has been pursuing upgrades to its air defense missile systems, in terms of both foreign purchases and indigenous production. An additional foreign purchase was revealed on April 5, when the US Defense Security Cooperation Agency (DSCA) announced an approved arms sale to Taiwan relating to the Patriot Advanced Capability (PAC-3) system, a surface-to-air missile (SAM) designed for both anti-aircraft and anti-ballistic missile roles. The new sale consisted of a USD $95 million package of contractor support for “training, planning, fielding, deployment, operation, maintenance, and sustainment of the Patriot Air Defense System.” This in turn followed from the July 2020 announcement of an estimated USD $620 million package of services and equipment for Taiwan’s PAC-3 missile recertification program.

In November 2021, Taiwan’s Legislative Yuan (LY, 立法院) approved a large supplemental defense budget allocation of NTD $240 billion (roughly USD $8.6 billion), with much of the budget oriented towards additional acquisitions of indigenously built anti-ship and anti-aircraft missile systems. In that special budget, approximately NTD $43.2 billion (18 percent) of the total was allocated for the delivery of additional air defense assets:

The MND reported to the LY in early March that it was moving up projected timetables and ramping up production capacity for selected missile systems—a move made possible in part by expansion of the facilities of the Chungshan Institute of Science and Technology (國家中山科學研究院), Taiwan’s leading institution for indigenous weapons design. These measures reportedly include doubling the annual production capacity of Tien Kung-III SAMs from 48 to 96 units annually; and nearly quadrupling (from 40 to 150) the annual production of the Hai Chien-II (HC-2, 海劍二型), or “Sea Sword-2,” a medium-range, active-guidance SAM intended for deployment on ROC Navy vessels.

Taiwan’s geography and resources place it at a significant disadvantage relative to the PRC in terms of air power—with, for example, the PLAAF enjoying a four-to-one advantage over the ROCAF in terms of active fighter aircraft. [2] Moreover, Taiwan’s air defense personnel must not only monitor the airspace around Taiwan itself, but also the archipelago of small islands under Taiwan’s administration in the Taiwan Strait and closer to the PRC’s southeastern coastline. This presents a daunting challenge.

Yet, Taiwan’s Ministry of National Defense appears to be engaged in an active effort to bolster Taiwan’s air defenses in an asymmetric fashion that will not exhaust its own resources. Although the ROCAF continues to respond to PLAAF flights with scrambles of escort fighter aircraft, its efforts are increasingly focused on improved capabilities to track and monitor potentially hostile aircraft via ground-based radar networks, as well as building up an enhanced inventory of both purchased and indigenously produced surface-to-air missiles for use in the event of actual hostilities. Taiwan’s air defense forces remain a David to the PLAAF’s Goliath, but the MND appears to be taking steps in the right direction.

[1] The Tien-Kung (TK, 天弓), or “Sky Bow,” series of surface-to-air missile (SAM) systems represent Taiwan’s leading indigenous air defense platforms. The variants in active service are the TK-II, a medium-range anti-aircraft missile with an active seeker for terminal guidance; and the TK-III, a solid fuel, hypersonic surface-to-air missile with a terminal microwave seeker, which is designed to serve both anti-aircraft and anti-ballistic missile roles. 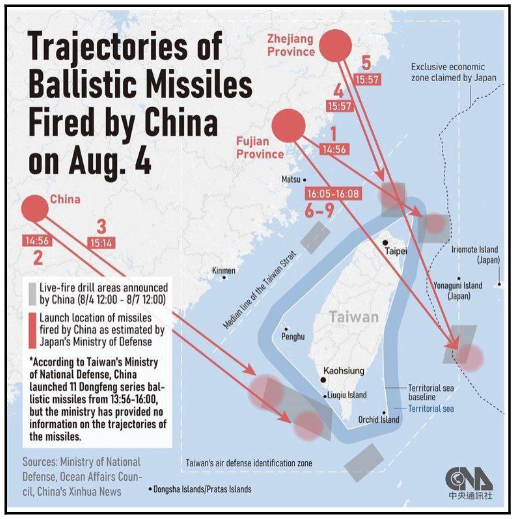 Parsing Signals from US and Chinese Patrols around Taiwan