Cyberattacks; air and naval forays across the Taiwan Strait median line; live-fire exercises; information operations; drones over Kinmen; missiles flying over Taiwan. The People’s Liberation Army (PLA) made sure that, in the region around Taiwan, 2022 would be a year for the history books—2023 might not be much better.

The Chinese Communist Party (CCP) is facing significant economic and social challenges at home. COVID-19 deaths skyrocketed after the rapid abandonment, without any apparent preparation, of “zero-COVID” measures. That sudden about-face late last year suggests that the party was far more spooked by last fall’s protests than many may have realized at the time. COVID-19 has also served to exacerbate the pre-existing frailties of the Chinese economy, with growth slowing in 2022 to a measly (by recent Chinese standards) three percent, according to official statistics. Perhaps that growth will rebound as China learns to live with COVID-19—but perhaps not. Structural issues at home and constrained consumer spending abroad may limit the economy’s ability to bounce back.

These challenges come at a time when the strategic competition between Beijing and Washington is becoming more entrenched, and at a time when foreign multinational corporations are viewing the China market with greater skepticism. The recent news that the Chinese population has started shrinking will only encourage those companies to diversify markets and supply chains, while contributing to a broader narrative of Chinese decline. Those developments, in turn, may well feed both domestic challenges at home and strategic challenges abroad.

The party, in short, may be in for a rough year ahead. It is possible that CCP General Secretary Xi Jinping (習近平) will seek stability abroad to manage problems at home, but that seems particularly unlikely in the case of Taiwan. After all, even as domestic challenges mounted in recent months, his years-long pressure campaign on Taiwan did not abate. In December, the month Beijing lifted “zero-COVID” restrictions, a total of 69 People’s Liberation Army (PLA) aircraft crossed the median line in the Taiwan Strait over nine different days, according to data released by the Ministry of National Defense and compiled by defense analysts Gerald C. Brown and Ben Lewis. As of the time of writing, 51 PLA aircraft had done so on eight distinct days in January 2023. Barring an unexpected change in China’s approach to Taiwan, expect more of the same going forward.

Indeed, Xi might judge that weakness at home merits greater assertiveness in the Taiwan Strait—not necessarily because he hopes to distract the Chinese population from their troubles, but rather to disabuse other capitals of the notion that political conditions within the People’s Republic are defanging him.

It is not just politics at home that may affect the party’s use of military power near Taiwan. Taiwan’s next presidential election is a year from now: parties will nominate candidates by the summer, and cross-Strait relations are sure to feature prominently in the campaigns. China has attempted to use military power to shape election outcomes in the past, as Gary Schmitt and I discussed in a previous paper for the Global Taiwan Institute:

Most famously, the People’s Liberation Army (PLA) fired missiles into waters surrounding Taiwan in 1996 ahead of the island’s first direct, open presidential election in an ill-fated effort to dissuade voters from casting ballots for Lee Teng-hui […] [A]fter increasing the frequency of long-haul PLA Air Force patrols through the Miyako Strait, many of which encircled Taiwan, between 2015 and 2018, there was a seven-month pause in such operations from June to December 2018. Flights resumed in 2019. It appears Beijing was intent on softening its threatening posture towards Taipei in the run-up to the November elections in order to deny the Democratic Progressive Party […] an issue on which to campaign against KMT candidates who were calling for closer relations with the PRC.

Does Beijing continue to see military power as a useful tool for affecting Taiwan elections? Leading up to last November’s “nine-in-one” elections, there was no obvious change to Chinese flights in Taiwan’s air defense identification zone (ADIZ), which occurred with regularity throughout 2022. There was, however, a nine-day layoff (November’s longest) in median line crossings just before election day, with those crossings resuming the following day. [1]

Even if Beijing sees military tools as potentially effective for steering voting in Taiwan, there remains the question of whether China will have a particular preferred outcome in the presidential race. In recent election cycles, Beijing has clearly preferred that the Kuomintang (KMT, 國民黨) candidate win, as the CCP has viewed the KMT as a useful partner in Taiwan. That may be changing. The KMT is in the midst of an internal debate about its preferred approach to China, and there are reasons to believe its own position may grow closer to that of the Democratic Progressive Party (DPP, 民進黨). As Jessica Drun wrote for the Center for Strategic and International Studies (CSIS) last November, “one of the major predicaments the KMT has faced since 2016 has been squaring the circle between what the Taiwan people want and what the PRC is willing to accept, with the two increasingly at odds with each other and with Taiwan’s domestic politics trending in a direction away from the PRC’s desired outcome.” Drun argues that “Beijing may be losing patience with the KMT,” because Beijing may no longer be confident that the KMT is “both electorally viable and pursuing policies consistent with a shared notion of ‘One China.’”

If Beijing believes that the differences between the DPP and KMT candidates are not substantive when it comes to each candidate’s preferred cross-Strait policy, China may see little reason to ease off military activities around Taiwan as it has done in years past. On the contrary, something akin to a meeting of the party minds in Taipei could lead China to further increase its use of coercive military tools, in an effort to dissuade whoever wins the presidential election from taking steps to which China would be opposed. 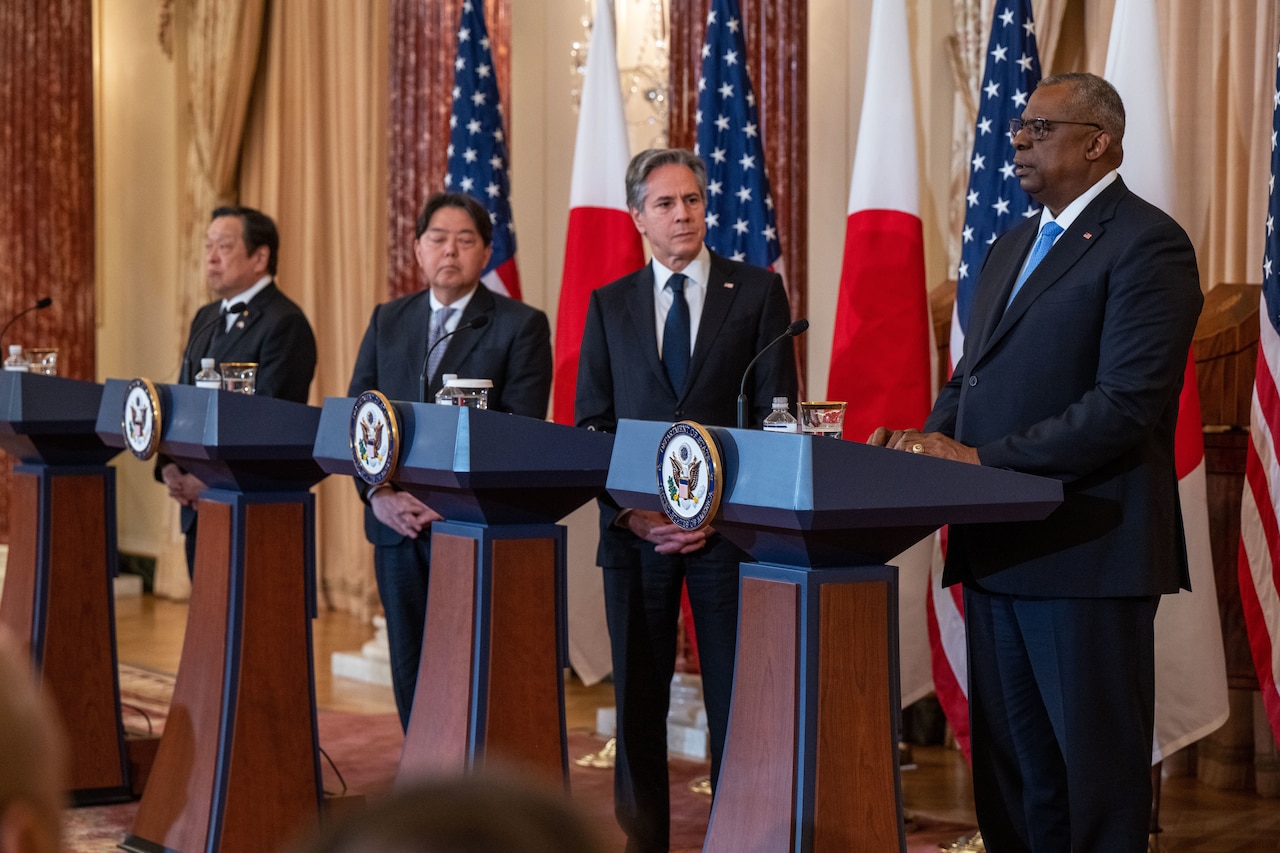 The Allies Go to Work

The regional security environment is also changing in ways that are not conducive to Chinese interests and may encourage Beijing to ramp up military activities around Taiwan in the near-term. Earlier this month, the United States and Japan announced a number of substantive steps they would take to deepen and enhance the alliance. Most notable among those steps is the planned reorganization by 2025 of the 12th Marine Regiment (on Okinawa) into the 12th Marine Littoral Regiment. When that reorganization is complete, the regiment will be manned and armed to allow for far greater mobility, anti-ship operations, and rapid response.

The recent US-Japan “2+2 meeting” came on the heels of a Japanese announcement in December that it would double defense spending within five years, with a significant portion of that new spending going towards “counterstrike” capabilities—including several hundred Tomahawk cruise missiles (Japan will join the United Kingdom as the only US ally to use the system). At an event at the American Enterprise Institute that same month, Assistant Secretary of Defense for Indo-Pacific Security Affairs Ely Ratner claimed that “2023 is likely to stand as the most transformative year in US force posture in the region in a generation.” Ratner noted in particular that US force presence would be increasing in Australia, and that the Philippines might be making more bases available for American use.

As these and other initiatives bear fruit over the remainder of the decade, the alliances will become nimbler, will pack far greater punches, and will be far more capable of proactively shaping the regional security environment. With these intended changes to force posture and structure now public, the PLA may begin experimenting with new operating patterns, may intensify intelligence gathering operations along Japan’s Ryukyu island chain, and may further employ military operations to express displeasure with alliance developments.

Days before then-Speaker of the House Nancy Pelosi landed in Taipei last August, Kevin McCarthy told reporters that he would like to visit Taiwan if he were to become speaker. He is now speaker and is likely to lead a congressional delegation later this year. China is arguably still responding to the Pelosi visit, as the PLA has maintained a sustained increase in the number of combat aircraft entering Taiwan’s ADIZ since last August. How will China respond to another speaker visit? If Xi Jinping considers his response to the Pelosi trip a baseline, then days (if not weeks) of live-fire exercises, median line crossings, shrill threats, and other provocations are in the cards. If he opts for escalation, we could see manned or unmanned aircraft entering the airspace of Taiwan proper, multiple missiles fired over Taiwan (perhaps at a lower trajectory than the missiles that overflew Taiwan in 2022), or harassment of nearby American ships and aircraft.

Will 2023 be another banner year for PLA activities around Taiwan? Signs point to yes. The United States, Japan, and other allies have also indicated their intentions to begin shaping the regional security environment in far more proactive ways. Taiwan will have its hands full as it monitors and responds to PLA operations in surrounding waters and skies; as it seeks to deepen its own defense engagement with the United States and its allies; and as it pursues its own military reform efforts aimed at boosting its ability to deter, defend against, and defeat Beijing’s aggression.

The main point: The PLA is likely to maintain a high tempo of military activities around Taiwan in 2023 due to China’s domestic challenges, the political calendar in Taiwan, and American and allied efforts to transform force structure and force posture in the region.

Beacon of Democracy: Taiwan as Hope for Chinese Civil Society