Bringing Taiwan to an International Audience: An Overview of Taipei’s Cultural Policy

Bringing Taiwan to an International Audience: An Overview of Taipei’s Cultural Policy 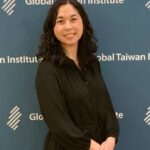 As noted in a previous article for the Global Taiwan Brief, censorship imposed by the Chinese Communist Party (CCP) has the potential to affect Taiwan’s creative space by limiting the opportunities for Taiwan to gain funding opportunities from, collaborate with, and distribute to global markets. In order to grow Taiwan’s creative industries and develop a creative infrastructure that has the talent, money, and equipment needed to produce high-quality creative works that can appeal to international audiences, it is important to find ways to ensure that Taiwan does not depend solely on the Chinese market. After assessing ways in which the CCP has restricted Taiwan’s creative space, the natural next question would be: what is Taipei doing about this?

Despite Taipei’s current interest in international appeal, Taiwan’s cultural policy initially had a more domestic focus. When the Kuomintang (KMT, 中國國民黨) took control of Taiwan in 1946, they found themselves governing over a people who had become “Japanized” due their time living under Japanese control. To counter this, the KMT enforced upon Taiwanese people a new identity emphasizing traditional Chinese culture, in order to legitimize their rule and create unity between the newly arrived Chinese and ethnically Chinese Taiwanese. The KMT’s cultural policy from the 1940s through the 1960s was both born out of hopes to transform Taiwanese into citizens of the Republic of China, and a reaction to Mao Zedong’s (毛澤東) communist Cultural Revolution. In 1967, the KMT established the Promotion Council for the Chinese Cultural Renaissance Movement (PCCCRM, 中華文化復興運動推行委員會) with Chiang Kai-shek (蒋介石) as its chairman. During this time, cultural policy in Taiwan was a centralized movement directly controlled by Chiang’s—and by extension the KMT’s— political convictions and ideological beliefs.

Taiwanese cultural policy remained focused on Chinese cultural identity into the 1980s. The government founded the Council of Cultural Affairs (CCA, 文化建設委員會) in 1981, which marked the first time that cultural affairs were controlled at the ministerial level in the Executive Yuan. It was not until after the election of the first Democratic Progressive Party (DPP, 民主進步黨) president in 2000 that the government began to redefine Taiwanese culture to emphasize the “characteristics and uniqueness of local culture.”

The pivot to emphasizing local Taiwanese culture was also accompanied by a greater interest in the economic benefits of developing creative industries. In 2002, Taipei initiated the Challenge 2008: National Development Plan (挑戰2008：國家發展重點計畫), which included developing cultural creative industries as one of its main investment plans, and CCA Chair Chen Yu-hsiu (陳郁秀) proposed the Cultural and Creative Industry Development Plan (發展文化創意產業計畫) at the National Culture Congress of 2002. The development of creative industries operated on three levels: regionally by creating industrial clusters and creative parks, nationally by establishing nationwide regulations, and internationally by integrating Taiwanese talent into cultural and industrial sectors in China and expanding Taiwan’s presence in international markets.

This culminated with the Legislative Yuan passing the Development of the Cultural and Creative Industries Act (文化創意產業發展法) in 2010. Under this new act, the government offered support for creative industries in the form of funding, subsidies, and tax incentives to attract investments. In the same year, the National Development Fund (NDF, 國家發展基金) approved the Implementation Project to Strengthen Investment in Cultural and Creative Industries (加強投資 文化創意產業實施方案), and set aside NTD $10 billion (USD $350,892,100) to be invested in cultural and creative industries over the course of the next ten years. Some companies that have received funding are Mandarin Vision—the film production company responsible for the Academy Awards-shortlisted film A Sun (2019), and Golden Horse winner My Missing Valentine (2020)—as well as B’IN Live Co., an event-planning company that has planned concerts and tours for well-known Taiwanese artists such as Mayday, Crowd Lu, and JJ Lin. 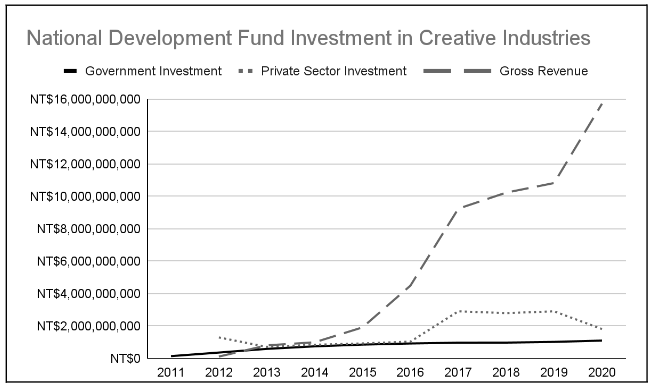 These two platforms serve complementary functions. “Fresh Taiwan” gathers representative Taiwanese design brands to be a “standard-bearer for Taiwanese cultural soft power” by participating in design shows worldwide, whereas Creative Expo Taiwan showcases Taiwanese creators locally in Taiwan and invites international buyers to come visit. Both initiatives have shown modest success, and are evidence of the Taiwanese government making a conscious effort to curate brands to represent Taiwan to the international market and build up Taiwan’s national brand.

In 2019, the MOC established the cultural intermediary the Taiwan Creative Content Agency (TAICCA, 文化內容策進院) to act as a link between the government and private industries. Unlike government organizations, TAICCA’s staff consists of industry professionals and works toward goals that are oriented towards public appeal and commercial viability. Through programs such as TAICCA’s Creative Content Development Program (CCDP, 內容開發專案計畫) and Taiwan’s International Co-funding Program (TICP, 國際合作投資專案計畫), TAICCA supports the development of local creators and provides incentives for prospective international investors.

Close collaboration with Netflix—through creative workshops and a memorandum of understanding—has been another way that TAICCA is broadening Taiwan’s access to global markets. However, entering the global market also comes with increased competition. Since Netflix has begun making its streaming data available, only 12 of the 66 Taiwanese productions hosted on Netflix have made it into the Netflix Top 10. Additionally, all the countries where Taiwanese productions have made it into the top 10—Hong Kong, Singapore, Indonesia, Malaysia, and Vietnam—are countries with close geographical and cultural proximity to Taiwan, lending credence to the oft-stated idea that Taiwanese products are most popular within the Chinese-language market. 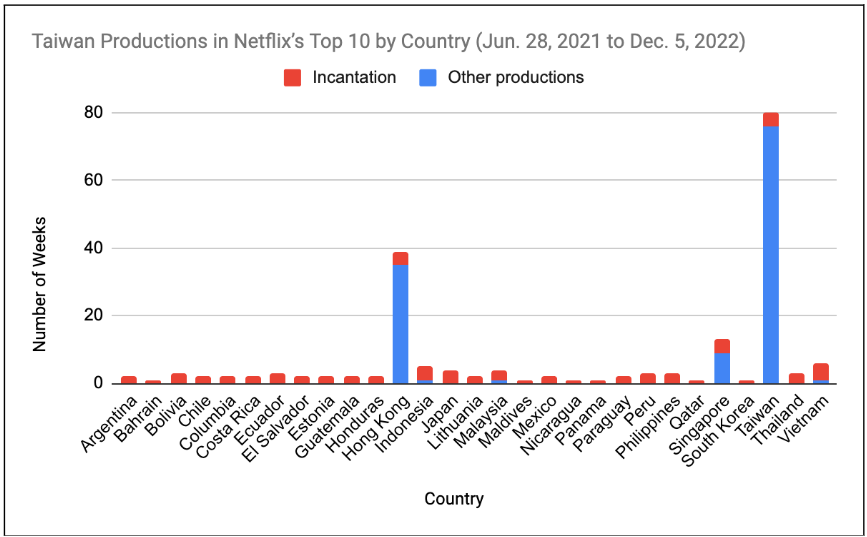 Taipei’s cultural policy has evolved considerably over the years. From a domestic-oriented policy promoting culture that was considered Chinese in origin, Taipei has since shifted to a focus on international appeal that highlights local Taiwanese culture. While the cultural policy of the past was created with the goal of encouraging national unity, the current policy is born out of Taiwan’s economic and geopolitical interests to develop a robust creative infrastructure that is capable of establishing a localized national brand on the international stage. Over the past decade, Taipei has provided funding for cultural creative industries and sought to define Taiwan’s cultural image through the “Fresh Taiwan” Pavilion and Creative Taiwan Expo.

The establishment of TAICCA and the rise of streaming platforms has further aided Taipei’s mission. Through the traditional distribution method of movie theaters, only five Taiwanese productions made it into UNESCO’s 2005-2017 list of Top 10 Movies Viewed by Country, and these films were only watched in 10 different countries. [3] By partnering with Netflix, Taipei has managed to increase access to Taiwanese productions on a platform where Taiwan does not have to directly compete with China. Overall, Taipei’s current success has been modest. However, the upward trend of gross revenue for cultural creative industries and the global reach that Netflix provides are positive signs of improvement.

The main point: While Taiwanese cultural and creative industries still face many challenges, Taipei’s approach to cultural policy has already exhibited impressive potential. In particular, the establishment of TAICCA and its cooperation with Netflix has been crucial for giving Taiwanese cultural products access to the international audience. Since many of these agreements are still in the fledgling stage, it will be important to see if this growth continues into the future.

[1] Creative clusters refers to the urban development practice of having a community of creators centralized in a given location, with the aim of stimulating innovation and creativity. Further reading: https://www.taiwan-panorama.com.tw/Articles/Details?Guid=9bbee537-359e-4efc-87b0-5d00c5c308ec&langId=3&CatId=10

KMT Assets a Barrier to Party Reform and Electoral Success