There are quite a few reasons to be optimistic about the US-Taiwan economic relationship in the year ahead. Trade and investment between the two economies are as strong as ever. Tourism is starting to pick back up as both countries have eased their travel restrictions. Moreover, 2022 saw the launch of a new high-level trade dialogue between the governments in Washington and Taipei.

There are still several minor issues, like trying to figure out the effect of the Biden Administration’s restrictions on advanced technology industries such as semiconductors, as well as their implications for US and Taiwanese businesses. Yet there are many areas for opportunity as well, including on clean energy and the digital economy. In the current international focus, it is important to remember that the US-Taiwan relationship is not as simple as trading American weapons for Taiwanese semiconductors. As one of America’s top ten trading partners, Taiwan plays a key role in the supply chains of a variety of industries.

A Year in Review

Trade between the United States and Taiwan continues to be as strong as ever. Even as “The Great Lockdown” comes to an end, during the last few years US trade with Taiwan was very stable, unlike trade relationships with other countries that were affected by delays and swings in demand.

Generally speaking, Taiwan is a major source for US imports of marine engines (21 percent), iron and steel (20 percent), computer accessories (16 percent), and semiconductors (14 percent), as well as a major destination for US exports of commercial vessels (28 percent), wood, glass, and plastic (11 percent), and military apparel (10 percent). There is also increasing demand for US crude oil in Taiwan—totaling about two percent of total US exports. Unfortunately, the trade in goods in 2023 is likely to slow down as demand for personal electronics diminishes, and as the US Federal Reserve further continues its efforts to slow US demand.

Where the trade of goods might fall or stagnate, the trade in services may step up to fill this gap. Services are important to any advanced economy like the United States or Taiwan. Trade in services—like travel, transportation, finance, insurance, or research and development—makes up nearly a quarter of all global trade. Travel services have taken some of the largest losses these last three years. However, now that the United States and Taiwan have eased their travel restrictions, travel will start picking up again. 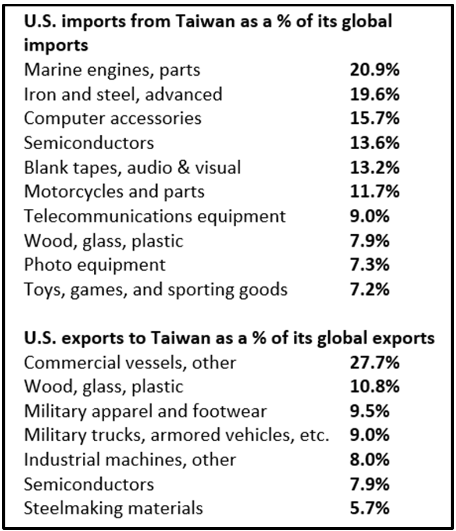 Image: Trade data between the United States and Taiwan from 2012 to present. (Image source: US Census Bureau, Country and Product Trade Data)

In 2019, the United States was Taiwan’s largest source of foreign visitors from outside of the Indo-Pacific. At that time, Taiwan would host an average of over 50,000 American visitors each month. But during the pandemic, monthly visitors dropped to fewer than 1,000. In November, visitors from the United States climbed as high as 21,000, suggesting that travel is quickly returning to pre-pandemic levels. However, there is still room for growth. As an additional note, tourism from Taiwan’s traditionally largest sources of tourism (China, Hong Kong, Japan, and South Korea) has yet to return to anywhere near pre-pandemic levels yet, which presents another opportunity for Taiwan’s tourism industry.

Finally, 2022 saw the launch of a new high-level economic dialogue between the United States and Taiwan. While trade and investment negotiations have traditionally been handled through the US-Taiwan Trade and Investment Framework Agreement (TIFA), trade negotiations will now be covered in the US-Taiwan Initiative on 21st-Century Trade. The new dialogue includes 11 areas for cooperation, including trade facilitation, standards setting, and supporting small and medium-sized enterprises, to name just a few. The year also featured continued efforts through the other on-going US-Taiwan initiatives—the Economic Prosperity Partnership Dialogue (EPPD) and Technology Trade and Investment Collaboration (TTIC)—which also include various economic initiatives. 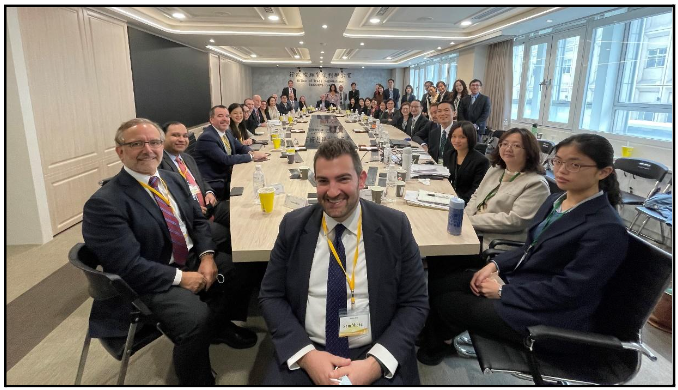 Image: US and Taiwan representatives engaged in negotiations in Taipei held as part of the “US-Taiwan Initiative on 21st-Century Trade” in January, 2023. (Image source: Executive Yuan, Office of Trade Negotiations)

With the United States hosting the Asia-Pacific Economic Cooperation (APEC) summit later this year, there is a growing expectation for the Biden Administration to deliver on some of its new Indo-Pacific economic initiatives, including the US-Taiwan Initiatives on 21st-Century Trade or the Indo-Pacific Economic Framework (IPEF). Of all the possible opportunities, there are three big areas to watch in 2023: energy, the digital economy, and semiconductors.

Energy has become an even greater topic of interest since Russia began its invasion of Ukraine nearly a year ago. There was a significant shock to global energy markets following the attack, leading to higher costs for many countries. And with 98 percent of Taiwan’s energy demand being reliant on imports, Taiwan’s market is extremely influenced by changes in global markets.

For producers in Taiwan, electricity costs are still up nearly 20 percent from a year ago, while gas prices are up 70 percent. The last few years have seen an increase in investment in renewable and green energy in Taiwan, particularly from European companies. Nevertheless, only two percent of Taiwan’s energy supply is made with renewable energy. Most energy still comes from crude oil and coal. This means that Taiwan will need to invest more heavily in renewable energy as it looks to achieve net-zero carbon emissions by 2050. This transition could also offer an opportunity to lessen the country’s dependence on natural gas, which makes up 18 percent of Taiwan’s energy supply.

The next opportunity comes from the digital economy. Whether it is through online services, digital commerce, social media, or other sectors, the digital economy is increasingly important. Some advanced countries have struggled to keep up with the course of digital modernization. Taiwan is not one of them. According to the IMD World Digital Competitiveness Ranking, the United States ranks second and Taiwan ranks 11th. There is increasing interest in launching a digital trade agreement in Asia, perhaps as a part of America’s Indo-Pacific Economic Framework (IPEF). While Taiwan is not a member of IPEF, American and Taiwanese investments in the digital economy—as well as our shared democratic values—make Taiwan a potential partner for any digital trade agreement.

Finally, the semiconductor industry is another area to watch this year. One the one hand, Taiwanese companies like Taiwan Semiconductor Manufacturing Company (TSMC, 台積電) are continuing with their manufacturing investments in the United States. Yet on the other hand, there are concerns that there will be more restrictions on semiconductor trade and manufacturing as well. In October, the United States announced new restrictions on semiconductor manufacturing using American products. China has already brought a complaint against these new restrictions to the World Trade Organization (WTO). While Taiwan has requested to join the discussion, Taiwan officials have made clear they do not necessarily agree with China’s complaint. Rather, as one the world’s leading manufacturers in semiconductors, they simply want to be a part of the conversation. There are also concerns about what American efforts with partners like Japan and the Netherlands to regulate semiconductor trade could mean for the world.

This year could be an exciting year for the US-Taiwan economic partnership if officials in Washington and Taipei are willing to put in the work. Meanwhile, next year will quickly get caught up in each country’s respective national elections. There are plenty of opportunities for cooperation on energy and the digital economy, as well as including Taiwan in a possible Indo-Pacific digital trade agreement. While there are some outstanding issues, like concerns about new semiconductor restrictions, these are unlikely to derail any meaningful economic dialogue between the United States and Taiwan.

The main point: US-Taiwan trade in goods is likely to stagnate this year, but expect tourism to bounce back. There will be plenty of opportunities to advance the trade relationship in the numerous US-Taiwan economic dialogues, but only if officials have the foresight to take the initiative.