In her inaugural address in 2020, Taiwanese President Tsai Ing-wen (蔡英文) reiterated her support for “peace, parity, democracy, and dialogue,” while strongly rejecting China’s “One Country, Two Systems” (一國兩制) policy as a tool to “downgrade” Taiwan and “undermine the cross-Strait status quo.” China’s recent military aggressiveness toward Taiwan suggests that Beijing has abandoned any adherence to the “status quo.” In 2021, Taiwan reported about 1,000 People’s Liberation Army (PLA) incursions into its air defense identification zone (ADIZ), nearly thrice the number (380) seen in 2020. According to Chinese state media, the PLA has increased its “warplane activity” and “routine” military drills to enhance “combat readiness,” as well as to deter Taiwanese “secessionists” and US-led “foreign interference.”

Concurrently, since 2019, Chinese President Xi Jinping (習近平) has been reiterating that China “must and will be reunified,” and has reserved “the option of taking all necessary measures,” including the use of force. Like Russian President Vladimir Putin, Xi has invoked history to justify “reunification,” “drawn from the evolution of cross-Straits relations over the past seven decades.” During the Ukraine crisis, the Chinese Ministry of Foreign Affairs has also repeatedly emphasized Taiwan’s status as an “inalienable part of China.” Understandably, Taiwan—which has always been concerned about China attacking the island when the world is distracted—has been immeasurably impacted by the war unfolding in Ukraine, especially in light of the China-Russia “no limits” friendship commitment and Russia’s total opposition to Taiwan’s independence in any form.

Although a Taiwan Ministry of National Defense 2020 report indicated that the PLA did not have the military capability to launch a full assault on Taiwan yet, the Chinese military has increased its posturing through “gray-zone” operations—infiltrative warfare tactics combined with aggressive rhetoric from Beijing. Further, the 2021 US Department of Defense annual report Military and Security Developments Involving the People’s Republic of China warned of the PLA’s capabilities to launch “various amphibious operations short of a full-scale invasion of Taiwan,” and that the PLA is building up its full-scale invasion capacity.

As a result, Taiwan has intensified its defense efforts—including increasing its asymmetric capabilities—to contain any contingency and frustrate China’s goal of achieving a “quick end game.” Tsai has been pursuing a military modernization program based on the strategy of “resolute defense and multi-domain deterrence” in order to develop a “maneuverable, compact, and integrated” defense force across domains. Additionally, the Taiwanese Ministry of National Defense will likely be allocated a “special budget for new fighter acquisition” of about NTD $247.2 billion (USD $8.7 billion) during financial years 2020-2026. This emphasis on self-reliance has become significant under the shadow of the war in Ukraine.

Against this backdrop of volatility—in concert with the all-out push to avoid unnecessary war in Asia—today’s exigent circumstances call for an immediate and urgent debate on the imminent Taiwan contingency. How can and should the international community respond in the event of China’s forceful occupation of Taiwan? What is the relative viability of each option? To what extent has the Ukraine crisis spurred a united global response to blatant acts of aggression? Would the defense of Taiwan ultimately be a lone mission with scattered, self-interested international support? Or will the United States be able to galvanize its Indo-Pacific partnerships and coalitions to unambiguously support Taiwan?

China has repeatedly blocked Taiwan from rejoining the United Nations (UN) based on the 1971 UN General Assembly Resolution 2758 (XXVI), which recognized the People’s Republic of China (PRC) as the sole legitimate government of China. The resolution has now become the PRC’s primary tool to legitimize its claims on Taiwan. Due to its growing clout, Beijing has also been successful in blocking Taiwan’s entry into UN-affiliated organizations like the World Health Organization. Additionally, the PRC has been successful in reducing the number of Taipei’s diplomatic allies to 14. Thus, considering the UN’s lack of support for Taiwan’s membership as well as China’s veto power, a meaningful UN action in the event of Beijing’s forceful occupation will be no easy feat—particularly when Taipei lacks a voice within the forum. The UN’s toothless responses to the Russian annexation of Crimea in 2014 and invasion of Ukraine in 2022 do not offer much hope either.

The Crimean annexation was a clear violation of international law as set under the UN Charter, the 1975 Helsinki Final Act, the 1994 Budapest Memorandum of Security Assurances for Ukraine, and the 1997 Treaty on Friendship, Cooperation, and Partnership between Ukraine and Russia. Yet, the UN’s actions remained constrained to General Assembly (UNGA) resolutions condemning the occupation and urging a withdrawal, alongside expressions of concern over the militarization of Crimea and calls to uphold the treaties in place. Similar apathy and helplessness were evident in the wake of the 2022 Ukraine invasion, despite emergency sessions condemning Russia for violations and urging member states to “take sides.”

Ultimately, any UN response is dependent on the political and security will of member states. Considering Taiwan’s non-state status, however, devising any UN action to protect the island’s sovereignty under a legal framework will be exceedingly complex. With China and Russia likely to veto any such move, a resolution condemning Beijing’s potential forceful occupation would be contingent on a majority vote in the UNGA. Further, a military response—even if only limited to forming a peacekeeping operation—is unlikely. The UNGA’s success in garnering majority support for Taiwan could potentially translate into approving harsh economic sanctions. However, due to China’s immense global influence, great power status, and deep economic integration with the global economy, such sanctions would be highly influenced by political dynamics and would therefore be difficult to impose. Thus, a viable UN response would likely be contingent on long-overdue UNSC reforms that “reflect 21st century realities.”

Notably, the European Union (EU) is gradually recognizing the direct importance of stability in the Taiwan Strait for European security and economic prosperity. Since 2016, the EU has committed to developing its relations with Taiwan on the basis of shared values of democracy and rule of law, while promoting “practical solutions regarding Taiwan’s participation in international frameworks,” but only if these efforts are consistent with the “One-China Policy” that the EU supports. A US-China conflict over the Taiwan Strait would bring about massive economic repercussions for Europe, which is deeply intertwined with China’s supply chains and reliant on the Chinese economy as its largest trade partner.

Further, it is unlikely that the North Atlantic Treaty (NATO) will be a part of a US-led military response to Taiwan. Even with the invasion in Ukraine, which is not a NATO member but a “distinctive” partner, NATO has refused to intervene militarily, limiting itself to condemnation and backing qualified sanctions. In particular, France and Germany, which have strong military presences and economic interests in the Indo-Pacific, are pushing for autonomy (the “Third Way”) and would be unlikely to join the US cause, particularly in a military capacity.

Hence, although the EU has resolved to use “every available channel” to promote “dialogue, cooperation, and confidence-building between the two sides of the Taiwan Strait,” the expectation of a unified European response—especially militarily—beyond a conflict resolution engagement seems overly ambitious.

The US Security Umbrella: A Joint Strategy in the Indo-Pacific?

In 2021, a US think tank ranked the Taiwan flashpoint for the first time as a “tier I risk,” defined as an event with a moderate likelihood of occurrence but with a high impact on US interests. The United States, which has treaty alliances with Japan and South Korea, has a considerable military presence in East Asia and the Taiwan Strait, making it the region’s biggest security provider. Therefore, any discussion on defending Taiwan against a potential forceful occupation by China would naturally revolve around US military activism and political will.

For decades, the United States has employed a policy of “strategic ambiguity” toward Taiwan. That is, it supports Taiwan’s self-defense capabilities, including arms sales, in accordance with the Taiwan Relations Act and the Six Assurances. Similarly, the United States included Taiwan as a regional partner in its latest Indo-Pacific strategy, but does not support Taiwan’s independence, and continues to adhere to the “One-China Policy.” So far, this approach has effectively deterred Beijing. Yet, in the event of an invasion by China, the United States will have to voice a clearer stance, as the bluff would have been called.

Fortunately, the on-ground realities are not so ambiguous. The United States has not only been reinforcing its military support to Taiwan in terms of training exercises and patrols, but has also been strengthening its alliance system in the Indo-Pacific, especially since the Biden Administration took office. In the event of an attack, the United States could marshal support from a variety of multilateral arrangements. These include the US-led Quadrilateral Security Dialogue (Quad) with Australia, Japan, and India, which has so far not dealt with the Taiwan question; the (controversial) AUKUS (Australia-US-UK) security pact, which has allowed Australia to move away from its hedging strategy; and the “Five Eyes” Anglosphere intelligence-sharing network. For Japan and Australia, who share bilateral security treaty alliances with the United States, any response to Taiwan’s forceful occupation would likely be well-coordinated with the United States.

At the same time, the domestic imperatives of the Quad partners such as Japan and India could pose a hindrance to coordinating a consolidated military response. Tokyo’s strong economic ties with Beijing, and Delhi’s continuous cautious approach on China as a neighbor, will act as barriers. This is not unlike what is happening in Eastern Europe, where Ukraine’s self-reliance on asymmetric war tactics has allowed it to hold its own thus far despite limited support from European neighbors.

Taiwan is not Ukraine, neither strategically nor geographically. Unlike Ukraine, Taiwan is “a mountainous smattering of islands” separated by a 100-mile-wide sea, whose security is closely connected with US credibility and its democratic values-based system—not to mention the “existential threat” a takeover of Taiwan would pose to other countries in the region. As such, a Ukraine-like scenario in the Taiwan Strait is unlikely. Even so, this does not preclude the fear that US alliances will turn out to be little more than normative mechanisms, in the event that Chinese aggression against Taiwan goes unchecked.

The Chinese Communist Party International Department: Advancing “One China” Behind the Scenes 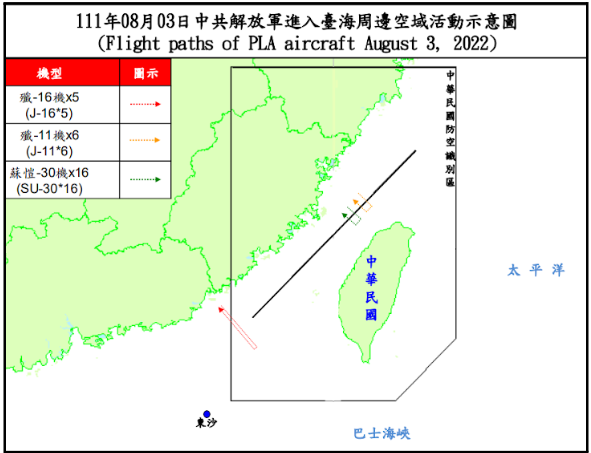