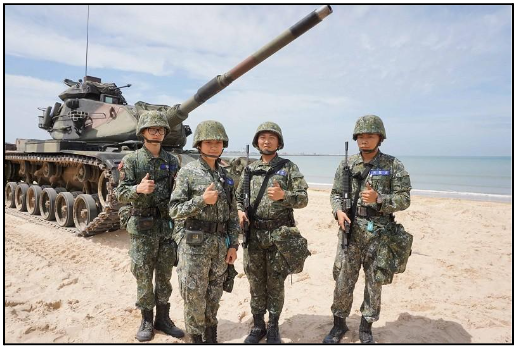 Meghan Shoop is a summer 2022 intern at the Global Taiwan Institute and a graduate student at George Washington University.

From marriage lotteries to assisted reproductive technology subsidies, the Taiwanese government has employed numerous measures in an attempt to remedy Taiwan’s demographic challenges, with scant meaningful results. Taiwan continues to lose an average of 829.8 residents per day as deaths begin to outweigh births. As a result, the government has become increasingly concerned about the effects of a smaller population on the military. In the 2017 Quadrennial Defense Review, the Ministry of National Defense (MND, 中華民國國防部) stated that, “the impact of our social and economic environment, along with a low birth rate, has been to reduce manpower, negatively impacting our troop replenishment and operational strength.”

Taiwan’s military has been moving from a conscription-based force to an all-volunteer force (AVF) since the latter half of the 2000s in large part by incrementally reducing the period of compulsory service of conscripts. The government’s objective was to enhance defense readiness using a smaller group of elite personnel better trained to conduct modern operations. Since beginning this transition, government officials and military experts in Taiwan have worried about the armed forces’ ability to reach recruiting goals now and in the future, with the goalposts of achieving an AVF pushed back several times. Against the odds, the military reached 90 percent of its recruiting goal in 2021; however, significant demographic changes will make achieving this target increasingly unattainable in the years ahead. By 2025, demographic experts estimate that Taiwan will only have around 75,000 draft-aged men, a 39 percent decrease from 123,000 in 2010. The number of draft-aged men will only continue to drop, creating challenges for Taiwan to field a conscription-based force, let alone an AVF. To help resolve this future recruiting issue, Taiwan’s military should focus on recruiting more women through the implementation of gender-mainstreaming policies. Gender-mainstreaming policies, or policies focused on gender equality, will attract more potential female servicemembers, allowing the military to achieve its recruiting goals despite Taiwan’s demographic changes.

Taiwan’s fertility rate (births per woman) was 1.07 in 2021, well below the replacement rate of 2.1 and ranking among the lowest in the world. Unless Taiwan increases its fertility rate, Taiwan’s population growth will continue to decline. Several issues contribute to Taiwan’s low fertility rate including rising disinterest in marriage among young people, low wages, skyrocketing housing prices, and difficulties balancing work and home life. Women also face discrimination in the workforce if they decide to have children. After taking maternity leave or announcing their pregnancies, mothers may face demotions, pay cuts, and sometimes even dismissals. In 2020, for instance, a Taiwanese company laid off an employee after discovering her pregnancy; while the company stated that it dismissed her because of COVID-19 restructuring, she was the only employee let go.

Due to such cases, many Taiwanese women fear facing consequences from their employers for becoming pregnant or taking maternity leave. As a result, only about 33 percent of women with children apply for parental leave in Taiwan, even though Taiwanese law guarantees maternity leave. Without the promise of economic or job security, many women have decided that having children is too expensive and risky to their careers. Although some of these women may wish to have children someday, they do not believe that the private sector will afford them this opportunity.

Due to demographic challenges arising from fewer women deciding to have children, the military will need to recruit women more heavily to reach its recruiting goals. Yet, women remain an unleveraged resource for the military. Like most militaries, Taiwan’s has traditionally been male dominated because of the need for brute physical strength, but the current trend of technology-based warfare requires more brain than brawn. Taiwan switched to an AVF with the goal of freeing up more resources to recruit soldiers with higher education levels to operate its growing arsenal of modern equipment. A large portion of women fit this requirement, as women make up over 50 percent of higher education graduates in Taiwan. [1] Not putting resources into recruiting these highly educated women will only be to the military’s detriment, especially with the looming shortage of young men.

While the rate of female servicemembers has gradually increased over the years, they still only comprise 13.6 percent of personnel in the Taiwanese military. Currently, the military does not prioritize female recruitment, as evidenced by the 2021 Quadrennial Defense Review using the words “female,” “woman,” or “women” zero times. Improving female recruitment will require the military to adopt gender-mainstreaming policies that provide benefits to women that they do not receive in the private sector.

Taiwan should observe how other militaries, namely South Korea, recruit women into their forces through enforcing gender-mainstreaming policies. South Korea faces many of the same problems as Taiwan, such as changing demographics and economic and job insecurity for women. While women only comprise about five percent of servicemembers in the South Korean military, the Korean government has nevertheless invested substantial resources into expanding female recruitment and improving working conditions. Unlike Taiwan, South Korea’s 2018 Defense White Paper even has a section entitled, “Raising the Proportion of Female Servicemembers and Providing Favorable Working Conditions,” which outlines the steps that South Korea has undertaken to improve the livelihoods of female servicemembers—especially female servicemembers with children.

As part of these efforts, the South Korean military has expanded daycare centers, nighttime child-care teachers, and gender sensitivity education for all servicemembers. The military built around 39 new daycare centers for military personnel from 2019 to 2022, raising the total number of daycare centers to 164. The South Korean military has also expanded the pool of substitute personnel for absences caused by childbirth or maternity leave, ensuring that female servicemembers can take their maternity leave without worrying about their work responsibilities. Additionally, pregnant servicemembers are exempted from night duties for up to one year after childbirth, and servicemembers can have up to three years of childcare leave included in their service period starting with their first child. All of these benefits provide female servicemembers with economic stability, job security, and a better work-life balance after childbirth than they would receive in the private sector.

The South Korean military’s gender-mainstreaming policies have borne some successes. Korean military academies have experienced an uptick in female student enrollment because of the attractive military benefits, especially for women who plan to have children, such as rarely facing career derailment after childbirth. These protections and benefits for female servicemembers have also contributed to an increase in the fertility rate among South Korean women in the military. The 2010 South Korea census showed that women in the military had a fertility rate of 1.61 children compared with the then-national rate of 1.15. While women still only make up a small percentage of South Korea’s military, Korea’s initiatives towards gender equality will allow the country to readily recruit more women when it experiences a shortage in draft-aged men.

Taiwan’s MND should adopt some of the practices that South Korea’s military employs to recruit more women into its ranks, while also creating its own unique policies. These policies should provide economic and other benefits to women that they do not receive in the private sector. To enlist more women, expanded gender sensitivity training will be needed for all servicemembers to reassure potential and current female servicemembers that women will be treated fairly and equally in the military. Gender sensitivity training should include mandatory workshops and discussion panels hosted by both experts in the field and current servicemembers to share their experience with gender equality in the military. Continuing to build military housing for servicemembers and their families will also represent an appealing economic benefit as housing prices continue to soar in Taiwan.

Furthermore, the MND should enact policies that protect female servicemembers who plan to have children from career derailment. These can include specific policies, such as counting a year of childcare leave as part of a servicemember’s service period when considering promotion and building additional daycare and preschool centers for servicemembers near military stations. The daycares should be free, and not merely subsidized; and should have nighttime staff to ensure flexible drop-off and pick-up times for servicemembers performing night duties. Currently, the MND has only opened one preschool, the Dazhi Non-Profit Preschool, for servicemembers as of 2022. Lastly, these policies must be explained and expanded upon in Taiwan’s Quadrennial Defense Review and its biennial Defense Report. Enacting these measures will cause the military to become a more popular career choice among women due to its economic benefits and family-friendly policies.

Although these measures might receive pushback from the military and the government, changes must be made to contend with Taiwan’s future demographic challenges. The military cannot keep ignoring the large pool of underutilized talent that it can recruit from: educated women. According to one survey, 56 percent of Taiwanese people already support women having to enroll in conscription. The majority of Taiwanese people are ready and interested in women playing an expanded role in the military, especially with increasing cross-Strait tensions. They know that Taiwan will need to take advantage of all its resources to protect itself against a potential Chinese invasion. Therefore, the military needs to immediately begin developing and implementing similar gender-mainstreaming policies as South Korea to enhance the economic and job security benefits that will encourage women to enlist.

The main point: Taiwan’s demographic challenges will make it more difficult to recruit soldiers into the military. To help solve this issue, the military should adopt gender mainstreaming policies, like the ones implemented in South Korea, to attract more female recruits.