As the relationship between the United States and the People’s Republic of China (PRC) continues to worsen, Taiwan has emerged into the Italian political debate. For the first time ever, Italy’s relations with Taiwan—and, inevitably, with the PRC—have become important subjects in the electoral campaign. On September 25, the Brothers of Italy (FdI)—the conservative and nationalist party led by Giorgia Meloni— won the Italian parliamentary elections, making Meloni the first female prime minister in Italy’s history. FdI won more than 25 percent of the vote, while the wider right-wing coalition—which comprises FdI, Silvio Berlusconi’s Forza Italia, and Matteo Salvini’s Lega—received 44 percent of the vote. During the electoral campaign, Meloni expressed surprisingly firm support for Taiwan in the face of the PRC’s coercive actions. This position is not coincidental, and has to be considered as a part of a broader strategy of reassurance that Meloni is conducting regarding her government’s foreign policy. The new Italian government is adopting a firmer stance vis-à-vis the PRC, and shedding renewed light on the importance of European ties with Taipei.

Italy and Taiwan: Moving Towards a Closer Relationship?

Last July, Giorgia Meloni met with Andrea Sing-ying Lee (李新穎), head of the Taiwan representative office in Rome, and addressed him as “the ambassador of Taiwan.” During the meeting, Meloni promised both to promote Italy-Taiwan relations and to play a positive role in advancing wider EU-Taiwan ties in the event of her appointment as prime minister. Then, in a September interview with Taiwan’s Central News Agency (CNA)—the first one by an Italian candidate in decades—Meloni expressed support for Taiwan. She defined the island as “a strategic commercial partner for Italy and Europe,” and firmly condemned “together with all the democracies in the world” the PRC military activities in the Taiwan Strait in August.

These statements seemed designed to emphasize her pro-US position in the global competition with the PRC. In the strongest pro-Taiwan remark ever made by an Italian political leader, Meloni also cited Beijing’s repression of activists in Hong Kong and Xinjiang, as well as the ambiguous position adopted by the PRC regarding the Russian invasion of Ukraine. Her firm stance against Beijing was further clarified when she stated that the Memorandum of Understanding on the Belt and Road Initiative, signed in 2019 by the Conte I government, has been a “big mistake” and suggested that she would not confirm Italy’s participation in 2024. Meloni also criticized the European Union for not doing enough: she stated that “the EU should deploy all its political and diplomatic weapons” and “exert as much pressure as possible” on the PRC to avoid a military confrontation in the Taiwan Strait. Specifically, she proposed severe sanctions against the PRC, going so far as to suggest the closure of the European market to Beijing in the event of an invasion of the island.

The PRC Embassy in Rome expressed deep discontent with Meloni’s statements on Taiwan, labelling them as “external interference.” PRC Foreign Ministry Spokesman Wang Wenbin (汪文斌) exhorted Italy to recognize the “highly sensitive nature of the Taiwan question,” to follow a “practical” “One-China principle,” and to not encourage the “Taiwan independence separatist forces.”

Despite Meloni’s comments, Italy still has a strong interest in maintaining a dialogue with Beijing, in particular as it relates to Italian exports to the PRC. During the G20 Bali summit in November, Meloni had a last-minute bilateral summit with Chinese General Secretary Xi Jinping (習近平), during which they discussed mainly “mutual economic interests.” Notably, the Italian prime minister also accepted Xi’s invitation to visit mainland China. However, Meloni’s overall posture towards the PRC is unlikely to change after this meeting. Considering the Biden Administration’s new approach of enhancing communication with the PRC and the long Biden-Meloni summit the day before, it is plausible that the United States pushed Rome to temporarily tone down its rhetoric against Beijing. 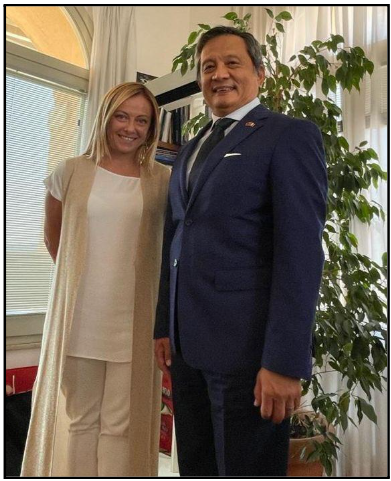 Prior to the Brothers of Italy-led coalition, recent Italian governments had adopted a friendlier position towards the PRC. The Italian governments led by the anti-establishment Five Star Movement—the first cabinet of prime minister Giuseppe Conte from 2018 and 2019, and the second from 2019 and 2021—viewed the PRC as an opportunity to export products made in Italy, taking advantage of its huge market potential. Furthermore, the party’s founder, Beppe Grillo, had multiple meetings with the PRC ambassador to Italy and has often spread PRC propaganda through his blog. Similarly, former Foreign Minister Luigi Di Maio echoed Beijing’s non-interference mantra on Hong Kong in 2019. On the other side of the political spectrum, the left-wing Partito Democratico (PD) has promoted profitable commercial exchanges with China, and has called for “a selective and genuine dialogue with the PRC, within the European framework.”

On the Italian political scene, Meloni’s statements on Taiwan are relatively unique. She is taking advantage of a void in the Italian political debate: historically, Italian political parties have maintained a high degree of ambivalence toward Taiwan and cross-Strait relations, preferring to focus on the importance of trade ties with Beijing rather than on civil and human rights. The fact that Meloni, with her ultra-conservative views on abortion, LGBTQ+ rights, and social issues, has expressed firm support for Taiwan is undoubtedly embarrassing for the PD. The PD has long been the leading Italian proponent for civil rights and should reasonably be expected to be a strong supporter of Taiwan’s vibrant, progressive democracy—which has made civil rights a key element of the island’s identity, and a means of distinguishing itself from the PRC.

The Stance of Meloni’s Government

Giorgia Meloni is currently conducting a substantial operation of reassurance towards the European Union and the United States. Although her past is decidedly Euro-sceptic, Meloni has recently adopted a more friendly position towards Brussels, calling for a European solution to current geopolitical issues, such as the current energy crisis. This shift seems designed to reassure European institutions, financial markets, and—perhaps most importantly—the United States. Italy considers the preservation of transatlantic relations to be essential, and Washington is seen as a crucial ally whose protection is even more important in these turbulent geopolitical times. Indeed, since the invasion of Ukraine, Meloni has been a strong voice of support for Kiev and NATO, consistently arguing for imposing stricter sanctions on Moscow and increasing military aid to Ukraine. Although in the past she advocated for the removal of Western sanctions on Russia in order to “protect Italian interests,” she has been firm and absolute in her condemnation of the invasion since its outset.

Accordingly, her statements on Taiwan and her tough position regarding the PRC seem intended to publicly emphasize the transatlantic spirit of her government. They signal the acknowledgment of the need for a new direction in Italy’s foreign policy: a new path where Atlanticism is not compatible anymore with the Italian inconsistencies in Asia-Pacific policy, where its desire to play an active role in the transatlantic alliance is not hampered by an ambivalent approach to the PRC. In order to rebalance the relationship with the PRC, close consultations with European and Atlantic partners are likely.

The appointment of former President of the European Parliament Antonio Tajani as foreign minister signalled the new government’s intention to build positive and constructive relationship with both the European Union and the United States. Nevertheless, while Tajani is a dedicated Atlanticist, he is not one prone to drastic course changes, as a courageous Taiwan policy may require. By contrast, Adolfo Urso, the new minister for enterprises and Made in Italy economic development, Guido Crosetto, the new minister of defence, and Giancarlo Giorgetti, the new finance minister, are all perceived as more inclined to take firmer and more daring positions. Moreover, the government is filled with personalities that have taken strong, critical positions toward the PRC: for example, in 2019, Anna Maria Bernini, the new minister of university and research, described the Memorandum of Understanding on the BRI as “a real hazard which flaunts smoky economic deals, entailing benefits only for the PRC.” These criticisms naturally lead to questions regarding the future of other Chinese-related initiatives in Italy, such as the Confucius Institutes. Accused of subversive operations, they have already been closed in many other European countries.

Meloni’s posture also seems designed to further distance herself and FdI from their coalition allies, who are perceived in Washington and Brussels as too close to Moscow and unreliable on the international scene. Silvio Berlusconi and Matteo Salvini’s past unreliability at the European and Atlantic level taught FdI to not follow their steps if it wants to survive politically. Berlusconi has recently stated that he had spoken to Putin, that he has been nominated by the Russian leader as “the first one of his true five friends,” and that Ukraine bears responsibilities for the war. Meloni was fast to distance herself and her party from such comments. She firstly restated that her government will be staunchly pro-NATO and that she would remove any member that did not respect this position. She then reassured the US embassy in Rome and its chargé d’affaires, Shawn Crowley. Even Matteo Salvini is seen within EU institutions and in the US as too close to Putin: in the past, Salvini has praised the Russian regime and has called multiple times for the removal of the sanctions on Moscow enacted in 2014.

Meloni’s statements on Taiwan and the formation of the new government came shortly after the restatement by the EU High Representative Josep Borrell of the EU’s “One China Policy.” Nevertheless, Borrell also stated that this policy “does not prevent us—the European Union—from persisting and intensifying our cooperation with Taiwan.” There is a growing awareness in Europe of the importance of Taiwan, “not just for the security and prosperity of the region, but also for ours.” Indeed, the European Union has expanded its relationship with Taiwan beyond economic ties, and is increasingly focusing on common democratic values, the rule of law, and human rights. In the last several years, there have been increased reciprocal visits by European and national policymakers to Taiwan, including by European Parliament Vice-President Nicola Beer.

Such visits play an important role in setting the agenda, in raising awareness, and in encouraging increased economic, scientific, cultural, political, and people-to-people exchanges. Furthermore, Lithuania recently allowed Taiwan to open a representative office in Vilnius with the title of “Taiwan” and inaugurated its  trade office in Taipei, potentially opening the way to similar actions by other Europeans states. Italy could soon further expand bilateral ties. A delegation of Lega’s parliamentarians visited Taiwan in 2019, and in October lawmakers across party lines launched the Taiwan-Italy Inter-Parliamentary Amity Association. With its domestic strength and a stable international environment, Meloni’s government could allow mutual high-level visits and promote closer relations, particularly in the technological field.

The main point: Giorgia Meloni’s Brothers of Italy won the Italian parliamentary elections and is now leading a conservative and nationalist government. During the electoral campaign, Meloni has firmly and explicitly expressed support for Taiwan while criticising the PRC. The new Italian government wants to clearly signal to Washington and Brussels that it will follow an Atlanticist line. This will entail a firmer stance towards the PRC—and likely, stronger, although veiled, relations with Taiwan.

Turkey’s Policy towards Taiwan: From Cross-Strait Relations to Syrian Refugees