Taiwan’s Continued Fight Against Human Trafficking and Next Steps

Taiwan’s Continued Fight Against Human Trafficking and Next Steps

Jennifer Hong is a senior director at the Project 2049 Institute.
Tags
Taiwan’s Continued Fight Against Human Trafficking and Next Steps

Transnational crimes hurt our world and society, damaging the fabric of democracy and eroding human dignity. Human trafficking and related crimes are borne out of the convergence of poverty and human greed, often amplified by the chaos of war and other crises. In transnational human trafficking, criminal actors systematically exploit gaps in the law enforcement approaches and systems of different countries, as well as the willingness, capabilities, and capacities of different governments. One of the notable transnational crime issues that Taiwan is currently combating is human trafficking.

Human trafficking is often described as modern slavery. It is a crime in which a perpetrator induces, recruits, harbors, transports, provides, or obtains a victim (acts), by means of force, fraud or coercion (means), and compels the victim to provide commercial sex acts or labor or other services (purpose). Victims can be both men and women, as well as children. Human trafficking can often be nuanced and complex, but when there is an element from each acts-means-purpose category, a crime of trafficking has occurred. Notable trafficking crimes found in Taiwan include: compelled sexual acts, abuses on fishing vessels, and domestic worker abuse. According to the US Department of State’s annual Trafficking in Persons Report (“TIP Report”), the Taiwanese government is making vigorous efforts to combat crimes of sex and labor trafficking, and has been ranked in the Tier 1 category for the last decade. [1]

The government of Taiwan, however, has not always recognized or fought these crimes in the past. As recently as the early 2010s, Taiwan was on the brink of being downgraded to the lowest ranking in the TIP Report. [2] In response, the Taiwanese government recognized the perils of this crime and the impact it was having on its citizens and society. In the last decade, the Taiwanese government has transformed its approach to trafficking, shifting from denying its occurrence to becoming a regional leader in combating trafficking.

Some of those achievements are worth noting. In 2016, Taiwan enacted the Human Trafficking Prevention Act (HTPA, 人口販運防制法), which criminalizes all forms of trafficking, and applies stringent sentences and penalties. Since its enactment, Taiwanese authorities have used the law to prosecute traffickers, and to encourage law enforcement and judicial members to employ it as a new lens to identify the crime when it occurs—as well as employing it as a new tool to arrest, investigate, prosecute, and punish perpetrators.

One of the biggest improvements has been in recognizing the role of the employment broker system in perpetuating human trafficking. The broker model—in which labor brokers control most aspects of employment for migrant workers—has become an undeniable part of Taiwan’s employment ecosystem. As a result of its opaqueness, the model has allowed systematic and egregious abuses to occur. While the broker model remains prevalent and continues to contribute to abuses that pervade Taiwan’s migrant worker environment, the government has taken a more forward-leaning approach to punishing brokers, resulting in a significantly higher number of recruitment brokers being penalized for abusive practices in 2021.

In addition, the Taiwan government is making progress in improving victim care. Specifically, it has worked to upgrade victim-centered shelter intake procedures for foreign victims, and to enhance the formal consultative role of non-government stakeholders in the victim identification, referral, and case management processes. While these efforts seem marginal and still fall short of ideal standards of victim care and support, the government has made significant progress in the last decade to treat victims with dignity, rather than as criminals. 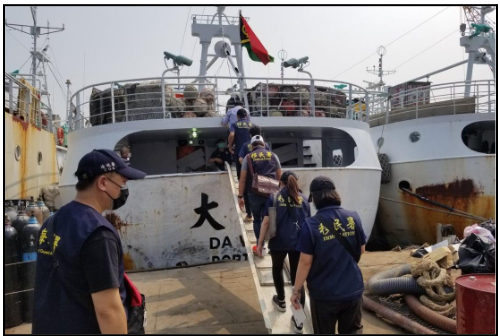 Taiwan’s efforts to combat human trafficking have not been perfect, but they nevertheless demonstrate why the island is often labeled a “beacon of democracy” in the Indo-Pacific region. In the last decade, in its effort to fight against trafficking, there has been (and continues to be) a balance of push and pull between government officials and civil society groups. They have challenged each other at every stage, but still work together for the greater good of society. However messy—and at times, frustrating—it may be for both sides when dealing with each other, Taiwan is a better place today because of their dynamic exchanges and efforts to hold true to the ideals of democracy, transparency, and rules-based order.

Despite these accomplishments and robust democratic processes, issues of human trafficking remain prevalent in Taiwan. The following three issues are representative of the types of crimes that pervade and negatively impact Taiwan’s society:

In order to continue its fight against human trafficking and maintain its leadership in the region and on the global stage, Taiwan should consider pursuing the following recommendations:

In summary, crimes of human trafficking remain prevalent in Taiwan. Taiwan authorities, however, have made strides in combating trafficking in the last decade. Nevertheless, there is still more work to be done to ensure that Taiwan is a safe place for migrant workers. As it has done in the last decade, Taiwan must remain committed and resilient in combating this crime in the next decade to come.

The main point: Over the past decade, Taiwan has emerged as a regional leader in combating human trafficking. However, it must do more to ensure that migrant workers are protected from exploitation in industries such as commercial fishing and domestic home care.

[1] The US Department of State’s Trafficking in Persons Report ranks more than 160 countries around the world in four categories (Tier 1, Tier 2, Tier 2 Watch List, and Tier 3) based on the government’s anti-trafficking efforts—to include prosecuting traffickers, protecting victims, and preventing the crime—on an annual basis. This annual report is congressionally mandated and released by the Office to Monitor and Combat Trafficking in Persons (J/TIP), and the most recent edition can be found here: https://www.state.gov/reports/2022-trafficking-in-persons-report/. Tier 1 ranking indicates that a government has made efforts that meet the Trafficking Victims Protection Act’s minimum standards. Governments need to demonstrate appreciable progress each year in combating trafficking in order to maintain a Tier 1 ranking. Tier 1 ranking does not mean that the government has fully or perfectly combatted the crime of trafficking in that given year.

[2] US Department of State source.