A central theme of cross-Strait relations throughout 2022 was the intensification of People’s Republic of China (PRC) military coercion directed against Taiwan, exemplified most clearly by the provocative military exercises conducted by China’s People’s Liberation Army (PLA) in August in the immediate wake of a visit by US House Speaker Nancy Pelosi (see here and here). In the latter half of December, the PRC capped off the year by conducting a series of significant naval and air operations in the maritime space surrounding Taiwan. These included: a deployment by the PLA Navy (PLAN) aircraft carrier Liaoning (遼寧); a combined naval exercise held in conjunction with the Russian Navy; and a dramatic surge in PLA aviation sorties over the Taiwan Strait centerline on Christmas Day. While individually these actions are consistent with existing patterns in PLA exercise activity, collectively they represent both gradually increasing confidence on the part of PLA forces in operating in an open ocean environment, as well as a further intensification of coercive pressure directed against the island and its citizens.

The Liaoning Carrier Deployment and Exercises East of Taiwan

This first of these three significant events was the deployment of the Liaoning aircraft carrier group, whose ships departed from the PLAN North Sea Fleet homeport of Qingdao on December 15. For this deployment, the Liaoning was accompanied by five other surface vessels: the guided missile destroyers Anshan (鞍山), Wuxi (無錫), and Chengdu (成都); the guided missile frigate Zaozhuang (棗莊); and the supply ship Hulunhu (呼倫湖). The ships transited through the Miyako Strait (between Miyako Island and Okinawa in the Ryukyus) by December 16, and entered the open Pacific to operate in the waters east of Taiwan and the Philippine Sea. The Japanese Maritime Self-Defense Force (JMSDF) reportedly deployed a destroyer and multiple maritime patrol aircraft to track the vessels of the Liaoning patrol group throughout its deployment. 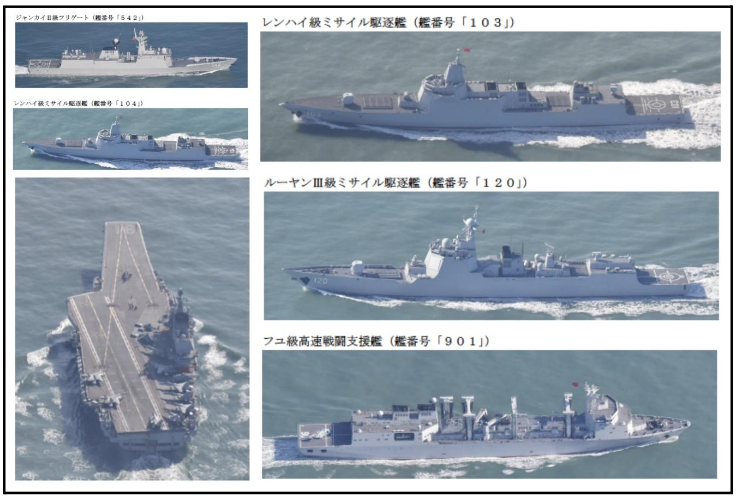 The Liaoning deployment is consistent with a recent pattern. In both 2021 and 2022, the carrier and its escorting ships conducted “beyond the island chain training” (跨島鏈訓練) in the Philippine Sea/waters east of Taiwan twice each year (in the spring and in December), in underway periods lasting approximately three weeks. [1] However, per analysis by Jiang Hsin-biao (江炘杓), a research fellow with the Institute for National Defense and Security Research (INDSR) in Taipei, this year’s total of 12 ships “was of unprecedented scale” when compared to the PLAN’s previous carrier group deployments east of Taiwan. Also per Jiang’s analysis, the Liaoning and its escorts—including the additional destroyers and support vessels—established an exercise area from 23 to 25 degrees north latitude and 125 to 130 degrees east longitude (forming a box south of the Ryukyus, and east of Taiwan), in order to conduct training operations intended to “strengthen battlefield experience in an expected combat area” (預想作戰海域加強戰場經營). Jiang also assessed that the December 16 sorties of two PLAN Air Force (PLANAF) H-6J bombers, which flew through the Miyako Strait and near Japan’s Daito Island before turning around, were likely used by both the bombers and the Liaoning escort ships for a mutual targeting exercise.

Despite the observable pattern in aircraft carrier training deployments, PRC media sources have, for propaganda purposes, attempted to link this deployment to criticisms of both US actions and growing US-Taiwan defense ties. For example, a researcher with the state-operated Yuan Wang military think tank (遠望防務研究院) in Beijing stated that the “Liaoning carrier group training is also a response to the US Navy’s increasing intrusion into waters near the Spratly Islands, showing them that the PLA is always ready to cope with the American’s provocation[s].” The nationalist outlet Global Times, citing reports that the Liaoning battle group had operated in waters to the west of Guam in late December, commented that this occurred at the same time that “the PLA Eastern Theater Command organized ‘record-breaking’ cross-service joint combat alert patrols and joint fire strike exercises in maritime and aerial areas around the island of Taiwan in a resolute response to the recent escalation in the US-Taiwan collusion.” The same commentary opined that “China will never attack US military bases in Guam as long as the US military does not attack China or interfere in the Taiwan question, but having such capabilities is a deterrent against potential US provocations.”

China’s second major naval event of the month was the “Maritime Union-2022” (海上聯合-2022) exercise, held jointly by the PLAN and vessels of the Russian Pacific Fleet from December 21-27. Participating PLAN ships, drawn from both the North and East Sea Fleets, included the Type 052D guided missile destroyer Baotou (包頭), the Type 052C guided missile destroyer Jinan (濟南), and the Type 054A guided missile frigates Binzhou (濱州) and Yancheng (鹽城). (PRC sources also indicated participation by one or more submarine units, but did not provide specifics.) Russian Navy vessels participating in the exercise included the guided missile cruiser Varyag, the destroyer Marshal Shaposhnikov, and the corvettes Sovershennyy and Hero of the Russian Federation Aldar Tsydenzhapov, all part of the Russian Navy’s Pacific Fleet. The Russian vessels sailed from Vladivostok, and reportedly transited the Tsushima Strait and entered the East China Sea on December 20-21.

Per an official PLA spokesman, the naval exercise was held in an area “from Zhoushan to Taizhou in the East China Sea,” indicating an operating area off the coast of Zhejiang Province. The official theme of the exercise was “uniting to uphold maritime security” (聯合維護海上安全), with activities consisting of: “establishing united closure and control, inspection and seizure, united air defense, united rescue, [and] united anti-submarine operations.” Russian state press, echoing a statement from the Russian Ministry of Defense, indicated that the purpose of the exercise was to “strengthen Russian-Chinese naval cooperation” and “to maintain peace and stability in the Asia-Pacific region”—and that the exercise was “a natural reaction to the actions of the US” in destabilizing the region.

One particularly interesting aspect of the PRC’s messaging surrounding the exercise was the language pertaining to maritime navigation, as well as potential closure and/or blockade operations. Official PRC sources described one of the key points of the training exercise as “jointly upholding safety and unimpeded strategic maritime passages” (共同維護海上戰略通道安全暢通)—even as it invoked unspecified maritime “closure and control” (封控) activities conducted by both navies. [2] The intended implication seems to be that Russian naval forces could become engaged alongside the PLAN in future blockade or inspection/seizure operations—although this is not explicitly stated.

PLA aircraft began making periodic sorties over the Taiwan Strait centerline (TSC) in 2019-2020, and this trend spiked dramatically in 2022—with the most dramatic surges often timed to accompany significant political events, such as visits to the island by senior US government figures. Such a spike in activity occurred again in late December, when the PLA sent a major surge of aircraft over the TSC on Christmas Day: on the 25th-26th, a total of 71 PRC aircraft reportedly entered Taiwan’s Air Defense Identification Zone (ADIZ). Per Taiwan Ministry of Defense information (see graphic below), at least 44 of these aircraft (including 42 fighter aircraft) conducted sorties over the TSC. 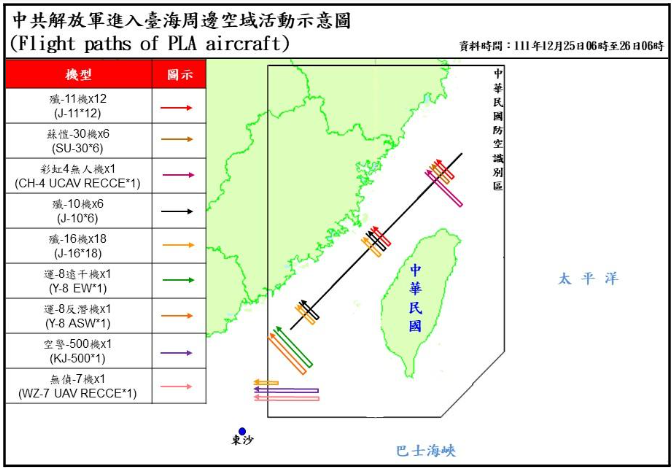 This surge of cross-TSC sorties appeared (at least on the surface) to represent a PRC reaction to another significant advancement in US defense support for Taiwan: on December 23, US President Joseph Biden signed into law the Fiscal 2023 National Defense Authorization Act (NDAA), which included authorization for up to USD $2 billion in Foreign Military Financing (FMF) loans to Taiwan for the purchase of US-manufactured defense equipment. This drew furious criticism from PRC state outlets, which criticized the legislative provision as another example of “US-Taiwan collusion.” On December 24, the PRC Foreign Ministry issued a specific statement condemning the NDAA, stating that:

This act disregards facts and plays up the “China Threat,” recklessly interferes in China’s internal affairs, attacks and smears the Chinese Communist Party, and is a serious political provocation against China. […] This act also contains many provisions of negative interference [regarding] Taiwan; seriously violates the One-China Principle and the stipulations of the three China-US joint communiques; sends seriously mistaken signals to “Taiwan independence” separatist forces, [and] causes serious damage to peace and stability in the Taiwan Strait. Taiwan is China’s Taiwan, [and we will] not tolerate any foreign interference in China’s internal affairs. The American side should immediately cease “using Taiwan to control China,” […] stop hollowing out and distorting the One-China Principle, [and] stop going further and further down this mistaken and dangerous path.

The PRC’s steadily increasing campaign of provocative military activity around Taiwan finished out the year with a bang, encompassing three significant events in December. The Liaoning carrier group deployment, the “Maritime Union-2022” naval exercise with Russia, and the Christmas aircraft sortie surge were not outliers. Rather, they represent continuity in terms of both increasing PLA operational proficiency, as well as the continuing effort by the CCP leadership to employ the PLA as a coercive geopolitical tool. Despite this, PRC state outlets have undertaken an active propaganda effort to paint these aggressive actions as a defensive response to US “interference” in the Taiwan issue, as well as the “provocation” of closer ties between the United States and Taiwan. The PLA’s demonstrative, coercive military operations in the air and sea spaces around Taiwan—a centerpiece of cross-Strait relations in 2022—can only be expected to continue, and likely to continue increasing in scale, as we move into 2023.

The main point: The PRC capped off a year of high-profile coercive military activity directed towards Taiwan with three significant events in December: an aircraft carrier deployment east of a Taiwan, a combined naval exercise with Russia, and a surge of aircraft sorties near Taiwan. Such actions may be expected to continue as Beijing further attempts to employ the PLA as a tool to intimidate both Taiwan and other states in the region.

[2] Of note, the choice of language in official PRC media regarding exercise activities focused on controlling maritime traffic is interesting. The official description of such activities is “closure-control” (封控, fengkong); the word “blockade” (封鎖, fengsuo) is not employed. The former usage seems intended to imply the latter, without the potential complications of explicitly saying so.

Reconsidering Taiwan’s Place in the International Order: Lessons from the WHO and ICAO

Sino-American War of Words Heats Up Over Taiwan

Will the Trump Administration Invite Taiwan to RIMPAC 2018?