On November 18, a quiet and solemn ceremony took place on the Penghu Islands (澎湖), otherwise known as the Pescadores. The afternoon ceremony, which took place at a park across the bay in the capital city of Magong (馬公), was attended by approximately 35 people from Japan and 15 local residents and visitors from Kaohsiung and Taipei. The ceremony marked the 111th anniversary of the sinking of the Matsushima off Mako (today’s Magong City, Penghu County, Republic of China), which killed more than 200 crew members. The sailors died when an explosion occurred in the ammunition magazine, causing the Imperial Japanese Navy cruiser to roll over onto her starboard side and sink stern-first.

The Matsushima, which was serving as a training vessel for the Imperial Japanese Naval Academy, had been anchored off Mako after returning from a long-distance navigational training cruise when the tragedy occurred. Among the dead were 33 midshipmen of the newly graduated 35th class of the IJNA. The incident itself, whose actual cause remains unknown, occurred on April 30, 1908. The ship, originally built by the Société Nouvelle des Forges et Chantiers de la Méditerranée naval shipyards at La Seyne-sur-Mer in France, was struck from the IJN list three months later on July 31 that year.

Later, a memorial was built in a park within the city that included the Matsushima’s Canet gun, a breech-loading 320-mm weapon that could fire 450-kg armor piercing shells at an effective range of 8,700 yards, standing perpendicular in the center. Subsequently, the memorial was rebuilt and relocated across the bay to the south, near where the sinking had occurred, at the aforementioned park. It was at this latter memorial that the mid-November ceremony was held, which I had the privilege of attending. A Buddhist priest and nuns from Kaohsiung, as well as local believers and others, assisted, with Japanese guests coming from the Kyushu, Kansai, and Kanto areas of Japan. Among the delegation from Japan were former senior Self-Defense Force officers, including general and flag officers, and retired parliamentarians.

This was actually the second time such an event took place. The first one was held a year before, in the fall of 2018. At that time, being the first ever postwar joint ceremony, more than 100 Japanese and Taiwanese—and an American, me—participated. It was officiated by a Shintō priest from Nami-no-ue Gu (Shrine) in Naha. The ceremony included retired SDF officers and a parliamentarian-turned-university president.

As a friend of the Kyushu delegation (having traveled with it to the inauguration of President Tsai Ing-wen in May 2016), and a symbol of the growing security relationship between Taiwan, the United States, and Japan, I had the honor of participating as one of the guests of honor and given the opportunity to place an offering at the memorial during the Shintō ceremony in 2018 and the Buddhist ceremony in 2019. In both cases, many Taiwanese were also present. Indeed, every year in the postwar period, local residents conducted a ceremony on behalf of the Japanese sailors in the absence of Japanese organizers.

In the prewar period, the Imperial Japanese Navy had conducted the ceremony, led by the famous admiral Tōgo Heihachirō at one point. However, the 2018 ceremony was the first time for Japanese to be in attendance in the postwar period. During the past seven decades, it has been the Taiwanese who kept the memory of the sailors alive. The feeling of closeness of the islanders toward Japan was very apparent during both visits.

We concluded both trips with trilateral security conferences held in Taipei in which the opportunities and challenges to closer military, political, diplomatic, and economic relations were discussed from many different angles. These public dialogues, conducted by experts with participation and comments by Japanese and Taiwanese citizens in attendance with a strong interest in deepening the respective bilateral relationships (Japan-Taiwan, Taiwan-US, US-Japan) and trilateral (US-Japan-Taiwan) one as well, have been both eye-opening as well as suggestive of the possibilities to come.

On the eve of another trip to Taipei in early December, I was dining with representatives from the Taiwanese Foreign Ministry in Japan when one of my hosts received a phone call and seemed very happy. After he hung up, he shared with me and the other guests (which included two Japanese academics and a businessman) that President Tsai had met earlier that day with Japanese students who were visiting the Presidential Office Building.

The youth were from Ehime Prefecture, on the island of Shikoku, which fell under this official’s jurisdiction. He is responsible for cultural exchanges, which includes assisting with coordinating and promoting school trips to Taiwan. Some 60 high school students and 5 teachers from Matsuyama Jonan High School had traveled to Taiwan for four days beginning on December 2 and were at the Presidential Office Building when President Tsai stopped to talk with them for about ten minutes, took photos with the students, shook hands, talked about her interests and hobbies, and asked them if they had tried the famous tapioca milk tea.

I was very happy to have heard about this interaction, for several reasons, including recognizing the impact that President Tsai likely had on these young people. In particular, one can only imagine the influence that seeing and talking with a female head of state had on the self-image of the Japanese female students—that they can become whatever they want to be, including prime minister in Japan (which has yet to see a female premier). Indeed, she may have become a role model in leadership for both boys and girls in the group.

Sister-City Relationships Should be Leveraged

As an educator myself who loves to take my students on trips, I know the power that traveling has on opening students’ minds. There are many similarities between Taiwan and Japan, but also numerous differences. The more Japanese young people and adults visit Taiwan, and Taiwanese visit Japan, the greater the mutual learning. For this reason, I am a big promoter of sister-city relationships and would like to see more between Japan and Taiwan. As I was completing this article, I spoke with the mayor of a large city in Osaka Prefecture and that very evening he was hosting a large delegation from Taiwan to discuss sister city ties and student exchanges.

According to a survey by Japan’s Ministry of Education, Culture, Sports, Science and Technology, 332 Japanese high schools visited Taiwan in Japanese Fiscal Year 2017. Overall, approximately 2 million Japanese visit Taiwan annually. The number of Taiwanese visiting Japan is even higher: 3.4 million. These numbers can be expected to increase particularly as Japanese-Korean relations continue to decline, and unrest in Hong Kong continues.

Related to travel, Taiwan and Japan rank high in mutual opinion polls, too. As I pointed out in an op-ed last year, Japanese have a high respect for Taiwan, with 66 percent feeling close to Taiwan, according to one poll, and 59 percent saying Taiwan is their favorite country in Asia. Similarly, Japan is, for Taiwanese, the country they most respect, as well as the country they most want to travel to and live in.

Political relations, at least in Japan, have not developed as quickly as one might have hoped despite the above trends. Although Prime Minister Abe Shinzo is by far the most pro-Taiwan of any recent Japanese leaders and likely any future one for some time to come, he has not seized the opportunities presented to him by the inaugurations of President Tsai and President Donald J. Trump in 2016 and 2017 respectively. He has missed opportunities to promote high level visits, a Japanese version of the US’ 1979 Taiwan Relations Act, invite Taiwan to join the Comprehensive and Progressive Agreement for Trans-Pacific Partnership, or even pursue a separate bilateral free trade agreement.

Parliamentarian interactions, however, are robust as are economic ties. Japan sent a 200-person delegation, which included more than 30 members of Japan’s National Diet, to participate in Taiwan’s Double Ten Day celebrations in October. These relationships, however, have yet to move the large ship of government to properly catch the changing winds.

Taiwan’s importance for the region, including Japan as well as the world, grows daily as China becomes more isolated and cracks down on Hong Kong and the populations of several ethnic minorities under Beijing’s control. Next year, which will see presidential elections in both Taiwan and the United States, will be an important year for Taiwan and its relations with Japan and the United States. Let’s hope that the Japanese government realizes what its people already do—that Taiwan is a very important country—for it, the region, and the world, and promotes even closer ties.

The main point: Against the backdrop of Beijing’s increased bullying of its population and neighbors, Taiwan and Japan people-to-people ties are growing through warship ceremony, sister-city ties, as well as student and parliamentarian exchanges.

Forging Strong Informal Diplomatic Partnerships: Why it Matters that Taiwan Lost Sao Tome and Principe and The Gambia—and Why it Doesn’t

The End of Martial Law: An Important Anniversary for Taiwan 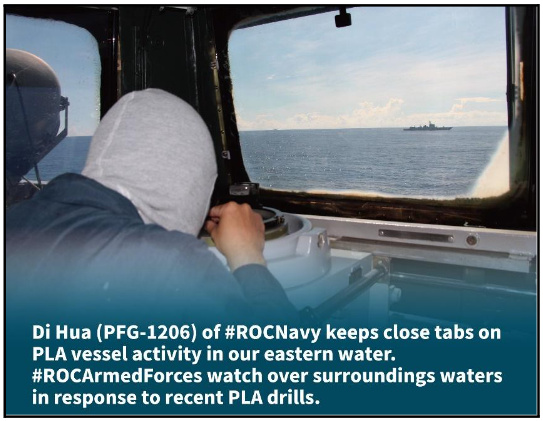 An Overview of Chinese Military Activity Near Taiwan in Early August 2022, Part 2: Aviation Activity, and Naval and Ground Force Exercises