The Chinese Communist Party’s (CCP) 20th Party Congress, held from October 16-22 in Beijing, will go down in history as the event in which CCP General Secretary Xi Jinping (習近平) formally cast aside the term limit precedent observed by his two immediate predecessors—and in a larger sense, scrapped the norms for leadership succession orchestrated by Deng Xiaoping (鄧小平) and other party elders in the 1990s. However, equally noteworthy were the extensive appointments of Xi’s protégés throughout the party hierarchy, which will give him even firmer control over the implementation of major policy directives—including those pertaining to Taiwan.

Following the conclusion of the party congress, the new line-up of the CCP Politburo Standing Committee (PBSC, 中央政治局常務委員會)—the senior-most executive body of the party—was unveiled in a public ceremony on October 23, when the members of the committee emerged from behind a door and lined up on a stage in Beijing’s Great Hall of the People. In keeping with a time-honored tradition of the CCP, the seven PBSC members entered the stage in hierarchal rank order: beginning with General Secretary Xi as the first to appear, and ending with Li Xi (李希), the seventh-ranked member. Aside from Xi himself, arguably the most important PBSC member for Taiwan-related policy will be Wang Huning (王滬寧), who entered the stage in fourth position. Wang’s background, and his likely policy portfolio in the new senior leadership echelon of the CCP, portends an even more hardline and ideological stance towards Taiwan for at least the next five years. 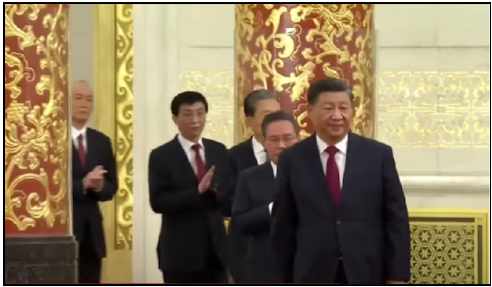 Image: Wang Huning (background, center left) was fourth in line entering the stage when the new PBSC was revealed on October 23, indicating his rank order in the new CCP hierarchy. (Image source: CNA)

The state (as opposed to party) positions to be assumed by the new PBSC members will likely not be announced until the next meeting of the National People’s Congress (NPC, 全國人民代表大會), the PRC’s nominal legislature, which is usually convened in the early spring of the year following a meeting (either full or plenary) of a party congress. However, senior party/state positions—with attendant policy portfolios—are usually correlated with ranked positions in the PBSC, allowing for predictions about these assignments to be made with reasonable confidence. Over the past 30 years, the number four ranking in the CCP hierarchy has consistently carried with it the chairmanship of the Chinese People’s Political Consultative Conference (CPPCC, 中國人民政治協商會議), the most senior bureaucratic body in the CCP’s united front work (統一戰線工作) system. Accordingly, this position carries with it responsibility for managing the party’s united front policy portfolio. [1] [2]

Wang Yang, a protégé of former CCP General Secretary Hu Jintao (胡錦濤) and an alumnus of Hu’s CCP Youth League faction (團派), was ousted from the Politburo and even the CCP Central Committee—alongside fellow Hu protégés Premier Li Keqiang (李克強), and Vice-Premier Hu Chunhua (胡春華)—with seemingly nowhere to go except to fade into retirement. Wang Yang will likely continue to head up the CPPCC apparatus in a nominal, lame-duck fashion until his successor is formally appointed at the presumed next meeting of the NPC in spring 2023, but we are likely to see real responsibility for united front affairs move to Wang Huning (if that has not happened already, behind the scenes).

In addition to his ceremonial state role as CPPCC chairman, Wang Yang also held the arguably more influential position as chairman of the CCP Central Leading Small Group for United Front Work (中央統一戰線工作領導小組), a body reportedly created in 2015. (The extent to which Wang Yang exercised real authority in this role, in light of Xi Jinping’s extreme centralization of authority in his own hands, is unclear.) The united front portfolio—which is focused on the cooptation, subversion, and control of ethnic, religious, and social groups outside the ranks of the party—includes many aspects of the CCP’s propaganda and recruitment efforts directed towards individuals and selected social groups in Taiwan. Wang Yang’s assigned position gave him a prominent role in overseeing these efforts, as well as in acting as a leading public face for engagement (on the CCP’s stage-managed terms) with selected “representatives” from Taiwan (see examples here and here). Wang Huning will presumably take up these roles, as well—thereby placing him at the head of the party’s top coordinating body for united front policy, and giving him a prominent public role in propaganda outreach to Taiwan.

The Background of Wang Huning

Wang Huning has had an unusual career path for a cadre who now sits at the apex echelon of the CCP. He started his career as an academic, teaching international politics and law at Fudan University in Shanghai. He moved to Beijing in 1995, alongside a large number of other officials from Shanghai elevated to central government roles under then-CCP General Secretary Jiang Zemin (江澤民). Wang took up a position at the CCP Central Committee Policy Research Office (中共中央政策研究室)—an internal party think tank—rising to become its director in 2002, as well as a member of the CCP Central Committee. He first entered the Politburo in 2012, and then the PBSC in 2017. In the latter move, he assumed duties as chief secretary of the Central Secretariat (中央書記處), which manages the day-to-day operations of the Politburo and the flow of documents to and from the party’s senior leaders. He was also appointed in 2017 to membership in multiple policy leading small groups (領導小組). [4]

The directorship of the Secretariat (a position in which Hu Jintao and Xi Jinping both served prior to their ascension to general secretary) was the capstone of a career spent as an ideologist and majordomo to top CCP leaders. In addition to his behind-the-scenes work as an aide, Wang was reportedly a leading ghostwriter for the ideological theories promoted under each of the party’s last three top leaders: Jiang Zemin’s “Three Represents” (三個代表), Hu Jintao’s “Scientific Development Concept” (科學發展觀), and Xi’s own “Xi Jinping Thought on Socialism with Chinese Characteristics in the New Era” (習近平新時代中國特色社會主義思想).

Wang’s ascension to the top ranks of the Politburo is unusual, in that he lacks administrative experience at the city/provincial level—or even in one of the party’s functional bureaucracies, such as the propaganda system or the CCP Youth League (both associated with the former patronage network of the now-discarded Hu Jintao). However, Wang’s evident skill at negotiating through rival factional networks, and at making himself the invaluable man-at-the-elbow to multiple party supreme leaders—and above all else, his apparent firm loyalty to Xi Jinping—has resulted in the improbable rise of this former academic to the CCP’s top echelon of power.

Signals of a Harder Ideological Line on Taiwan

Although a former academic, Wang Huning is no liberal reformer. Rather, he has demonstrated consistent support for both authoritarian CCP political control and Xi’s nationalist vision. His likely assumption of the party’s united front portfolio will place a Xi loyalist in control of this essential component of the CCP’s outreach-cum-subversion efforts directed at Taiwan. Wang’s elevation to be the PBSC’s united front point man is yet another indication of Beijing’s increasingly hardline stance in terms of Taiwan policy. Many parallel examples could be cited from the 20th Party Congress: one of the most troubling was the manner in which Xi Jinping’s official work report for the event invoked “restored order” in Hong Kong as a successful example of the implementation of “One Country, Two Systems”—and as a model for Taiwan.

Although Wang Huning did not rise through the CCP’s propaganda bureaucracy, he is an ideologist, as well as a Xi loyalist—and his ascension is yet another sign of an increasingly ideological and hardline CCP policy towards Taiwan. Outside observers of the Chinese political system have frequently underestimated the importance of ideology in CCP statecraft, but it is long past time to start taking seriously the CCP’s pronouncements on ideology, and what they portend for the future. Wang Huning’s assumption of the united front portfolio will likely see an even further intensification of propaganda and subversion directed against Taiwan’s open society and democratic system in the years ahead.

The main point: The appointment of Wang Huning, a firm Xi loyalist, to the expected management of the CCP’s united front policy portfolio is likely to prove yet another component of Beijing’s increasingly ideological and assertive policy towards Taiwan.

[2] One article from the South China Morning Post, published before the line-up of the new PBSC was announced, indicated that Wang Huning would be appointed as the Chairman of the National People’s Congress. However, sourcing for this assertion was not indicated, and appointment as NPC chair (traditionally reserved for either the #2 or #3 in the PBSC hierarchy) would not match Wang’s PBSC ranking.

What Does Beijing Mean by Its “Initiative in Resolving the Taiwan Problem”?