On November 29, the US Department of Defense (DoD) released the 2022 edition of Military and Security Developments Involving the People’s Republic of China (more commonly known as the “China Military Power Report”), an annual report intended to provide an unclassified overview of the significant developmental trends and capabilities of the People’s Liberation Army (PLA). This year’s report drew particular press attention for sketching out four general scenarios of primary concern for People’s Republic of China (PRC) military action against Taiwan: an “air and maritime blockade,” “limited force or coercive options,” an “air and missile campaign,” or an amphibious “invasion of Taiwan.”

The DoD’s “China Military Power Report” provides an impressively comprehensive view of the PLA’s growing capabilities (within bounds of publicly releasable information), and is widely cited by journalists and defense commentators. However, there are other such documents that receive far less attention—including the 2022 Chinese Communist Military Power Report (111年中共軍力報告書) produced by the Republic of China’s (Taiwan, ROC) own Ministry of National Defense (MND, 中華民國國防部). This document is much lower-profile: this year’s edition was published by the MND on September 1, but is neither posted on the MND’s public webpage nor translated into English, as is the case with many other MND policy documents. [1] The author has obtained a copy, however, and presents a summary of some of the more significant content in this article. Taiwan’s own version of the “Chinese Military Power Report” is well worth examining for what it reveals about the perspectives of MND officials as they contemplate the increasing threats posed to the island and its people by the rapidly growing capabilities of the PLA—and for what it further suggests about some of the gaps in perception that exist between defense planners in Washington and Taipei.

The CCP View of Security and the Priorities of the PLA

The MND’s report opens with two brief chapters detailing the Chinese Communist Party’s (CCP, hereafter “the party”) control over the PLA, the party’s comprehensive view of security, and the role of the PLA. In particular, it cites the CCP’s National Security Strategy (2021-2025) (國家安全戰略 [2021-2025]) and its “Comprehensive Security Concept” (總體國家安全觀) that ties together a broad range of factors of concern to the CCP regime—including domestic security, economics, political and social control, technology, and the international environment. Within this construct, a number of key goals are to be pursued in relation to two key dates: that of the party’s 100th founding anniversary in 2027, and the PRC’s founding anniversary in 2049. [2]

The report notes that the PLA plays a large role in this overall process, within the linked “China Dream” (中國夢) and “Strong Army Dream” (強軍夢). Accordingly, the PRC’s military budget has steadily increased, with the goal both to develop the necessary “capabilities to defeat the strong enemy” (對抗強敵 [打勝仗] 能力)—understood to be the United States—as well as to surpass the military capabilities of all other countries in the Indo-Pacific region. To this end, the PLA may be expected to continue strengthening its capacity for joint operations, to further pursue “military-civil fusion” (軍民融合), to seek out additional overseas bases, and to project presence with “longer-range patrols beyond the island chain and joint strategic patrols” (跨島鏈長航與聯合戰略巡航)—with the latter intended to ultimately push foreign military presence out of the region. [3]

The MND report cites both CCP official documents and leadership statements to further delineate the PLA’s long-term goals: for example, it cites the CCP’s July 2019 White Paper on China’s National Defense in the New Era (新時代的中國國防白皮書) to describe the PLA’s overarching posture of “active defense” (積極防禦) (an exceedingly broad term allowing for offensive operations under a wide variety of circumstances). From this document, it also cites three milestone goals for the PLA:

In all of these matters pertaining to PLA modernization, Taiwan stands front and center as the PLA’s priority concern. The MND report cites June 2022 comments made at the Shangri-La Security Dialogue in Singapore by PRC Defense Minister Wei Fenghe (魏鳳和), who declared that “resolving the Taiwan problem and realizing reunification is the historical mission of the party” (解決臺灣問題，實現統一是黨的歷史任務). [5] 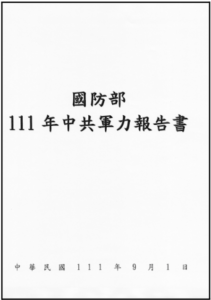 The Major Types of PLA Operations Directed Against Taiwan

The MND report also provides overview assessments of the PLA’s five branch services (the PLA Ground Force, the PLA Navy, the PLA Air Force, the PLA Rocket Force, and the PLA Strategic Support Force), but it includes only limited comments (without specific numbers) on the PLA’s growing order of battle. [6] In terms of either ongoing or potential future PLA actions against Taiwan, the report identifies offensive actions under eight scenarios (as compared to the four basic scenarios of the DoD report):

One of the most illuminating aspects of the report is its discussion of the PLA’s more aggressive posture towards Taiwan in 2022. This posture was most clearly displayed during the August 2022 PLA operations that followed the visit to Taiwan by US House Speaker Nancy Pelosi (see here and here), but has also been demonstrated in a much broader pattern of steadily growing “gray zone” encroachments over the past three years (see here and here). The MND report characterizes these acts as being part of a campaign of “military intimidation” (as noted in the list of scenarios above) directed against Taiwan. The report also describes these operations throughout 2022 in terms of “three normalizations” (三個常態): conducting patrols of fighter aircraft around Taiwan (落實環台戰機巡航); using multiple types of military assets to approach Taiwan and cause warning alerts (多種兵種抵近臺灣警訊); and conducting joint military exercises around Taiwan’s periphery (在台周邊進行聯合演訓). The use of military assets in this way is part of a larger psychological warfare campaign of “civil attack, military intimidation” (文攻武嚇) intended to target the mindset and morale of Taiwan’s population. [8]

According to the report, the major categories of PLA operations targeting Taiwan in 2022 included:

Notably, the report explicitly links many of these actions with psychological warfare. For example, it states that the PRC’s declared closure areas “were also featured in state media, and promoted on the internet, implementing military intimidation towards us, and generating panic among the people” (同時秀過官媒 網路渲染 對我進行軍事威懾 造成民心恐慌); and it describes the August missile launches as intended to “create social tensions in our society” (試射飛彈製造我社會不安). [10]

As both were released in the autumn timeframe, and focus upon the same subject, it is tempting to compare the US DoD report and the one produced by Taiwan’s MND. In truth, the two are very different: the US report is much longer (174 vice 31 pages) and far more detailed, taking a comprehensive view of major developments affecting PLA capabilities and doctrine (as well as secondary subjects such as the PRC’s military diplomacy). The MND report is much narrower in scope, and is understandably focused on developments directing affecting Taiwan and its regional environment.

Comparing the two reports, however, can be illuminating in some fundamental respects. One of the most prominent of these differences may be found in the relative focus on the threats to Taiwan. The US DoD report identifies multiple threat scenarios for Taiwan, including considerable attention given to the prospect of the worst-case scenario: a cross-Strait invasion. (The word “invasion,” for example, appears in the DoD report 16 times in relation to Taiwan.) By contrast, this threat receives little space or attention in the MND report, which is overwhelmingly focused on the employment of the PLA as a tool for intimidation and psychological warfare. [11] Insofar as there is discussion of more directly threatening courses of action, it is largely focused on scenarios below the threshold of an invasion, such as a threatened blockade.

While too much could easily be made of textual differences in such official documents, this may be another illustrative example of a gap in perceptions that explains—at least in part—the serious differences that exist between defense officials and commentators in Washington and Taipei. US-based commentators, concerned with the most dangerous scenario of a cross-Strait invasion, have tended to forcefully advocate a fundamental reform of Taiwan’s defense posture, in the direction of asymmetric capabilities intended to make an amphibious invasion a daunting prospect for the CCP leadership and the PLA high command. Taiwan’s MND, for its part, has taken limited steps in this direction (see here and here), but still maintains a traditionally oriented defense establishment with a conventional force structure.

Such a force structure is, arguably, far better suited for peacetime responses to “gray zone” territorial encroachments (and perhaps, for making demonstrative efforts intended to bolster public morale) than it is for making an actual invasion as bloody and protracted, and as daunting a prospect, as possible. With such a significant gap in the relative weight given to assessments of the PLA’s threat to Taiwan, frictions between US analysts and Taiwan defense planners are likely to continue.

The main point: This year’s Chinese Communist Military Power Report, produced by Taiwan’s Ministry of National Defense in early September, presents a summary overview and analysis of the PLA’s developmental trends and significant operations in 2022. The report places a heavy emphasis on the PLA’s employment by the CCP as a tool for “military intimidation” and psychological warfare directed against Taiwan’s citizens.

[11] It should be noted that the DoD report also gives attention to these concerns: for example, the term “psychological warfare” appears 18 times in the text.