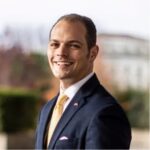 Erik M. Jacobs is an adjunct fellow at the Global Taiwan Institute.
Tags
Challenges and Opportunities for the “Chip 4” Group

On September 28, the American Institute in Taiwan (AIT) hosted the first virtual meeting of the US-East Asia Semiconductor Supply Chain Resilience Group (or the “Chip 4” group), which aims to bring together representatives from the American, Taiwanese, Japanese, and South Korean governments to discuss and build resilience throughout the semiconductor supply chain. The initial meeting took place more than one year after reports emerged that the US government had begun discussions to establish such a group amid tensions and disagreements between participating countries on key elements of the plan. It was also held a few days before the US Department of Commerce’s Bureau of Industry and Security (BIS) announced new export controls on certain technologies—including semiconductors, chip manufacturing equipment, and super computers—that are critical to China’s domestic advanced technology industry.

In order to address pandemic- and national security-related supply chain challenges, the US government first called for coordinating semiconductor activities with like-minded nations in 2021. Yet, progress on implementing policy objectives has been slow. Leaders and ministers have met at various fora, including the Quadrilateral Security Dialogue (the “Quad” framework, which includes the United States, Australia, Japan, and India) and the Indo-Pacific Economic Framework (IPEF) for Prosperity—which does not include Taiwan. These meetings have had mixed results, as bilateral engagement between Washington and Taipei, Tokyo, and Seoul has continued.

Establishing new supply chains and new procedures as a part of the Chip 4 group would have a major impact on the semiconductor industry’s global supply chains. Currently, American companies lead in the equipment and software segments of the industry; Taiwanese companies like Taiwan Semiconductor Manufacturing Co. (TSMC, 台灣積體電路製造股份有限公司) lead in foundries; South Korean companies like Samsung Electronics and SK Hynix lead in production; and Japan is a global leader on semiconductor materials and components. With buy-in from participating countries, a “Chip 4” arrangement could be used to coordinate export control policies and manufacturing incentives programs to lessen China’s role in the global semiconductor supply chain. With more reliable inputs components, high production and testing standards, and visibility into the supply chain, the four countries could address both supply chain reliability and trust issues throughout the supply chain by verifying provenance, and also having greater visibility into each step of the manufacturing process with trusted partners.

While there are scant details on the first meeting of the Chip 4 group and no concrete plans were made for a follow-up meeting, it has been confirmed that representatives from the United States, Taiwan, Japan, and South Korea discussed supply chain collaboration and other semiconductor-related issues. If the Chip 4 group can establish regular meetings and drive important supply chain and semiconductor production challenges forward, it would be a key step towards including Taiwan in multilateral technology discussions outside of ongoing, bilateral US-Taiwan platforms—such as the US-Taiwan Initiative on 21st Century Trade, and the US-Taiwan Technology, Trade, and Investment Collaboration group.

While the establishment of a Chip 4 group seems natural, it was not without tension and disagreement, as each party has varying domestic considerations when addressing how to reshape the global semiconductor industry.

American policymakers will have to address how to support and grow the American semiconductor industry, while also accounting for the possibility that commercial and political interests in other participating countries may differ despite being broadly aligned. Meanwhile, senior Taiwanese officials have acknowledged that totally decoupling the advanced technology sector from China would be exceedingly difficult—especially because China is Taiwan’s largest trading partner, with a large part of Taiwan’s export industry comprised of machinery and integrated circuits. Despite these concerns, President Tsai told a bipartisan delegation of US lawmakers visiting Taipei in September that chips being produced in democratic countries are critical for building sustainable semiconductor supply chains.

Samsung’s semiconductor business leaders have shared with the South Korean government their concerns regarding the proposal, and have even expressed a desire for the company to “seek understanding from China” before negotiating with the United States on this issue. South Korean chip producers have relied on Chinese fabs for mass production, and leading South Korean firms including Samsung and SK Hynix have major facilities in China—including Samsung’s only NAND flash plant, and SK Hynix’s DRAM chip production facilities—greatly increasing their risk profile. South Korean leaders also appeared to be acutely aware of some of the risks of Chinese retaliation for participation in the group, as Seoul was the last to confirm its participation and has not yet made a commitment to attend sessions other than the preliminary meeting. Prior to the meeting, South Korean officials referred to the grouping as a “semiconductor supply chain consultative body” instead of an “alliance,” and said they wanted to respond to the initial meeting to ensure it reflected Seoul’s national interests. For their part, Japanese representatives have also expressed some concerns about the group: for example, Economic Security Minister Takaichi Sanae stated that it would be important to “be mindful that efforts in economic security do not restrict business activities and damage innovation or efficiency” in the supply chain. Previous political disagreements between Seoul and Tokyo have also played a role in shaping semiconductor-related export policies between both countries, as well.

Other Forms of Cooperation

The US Department of Commerce’s recent decision to enhance export controls and target China’s domestic semiconductor industry is a step in the right direction to weaken Beijing’s dominance in the semiconductor supply chain. However, it could lead to problems for Taiwanese, South Korean, and Japanese producers who are over-reliant on Chinese components for their production, especially if China chooses to retaliate and restrict component supplies. Active cooperation through fora such as the Chip 4 could help mitigate these concerns, and will be essential for creating a future supply chain that is not reliant on Chinese components or unreliable supply chains.

A small provision in the USD $52 billion CHIPS and Science Act is also reserved for coordination with foreign governments on supply chain security, and could present an opportunity for US-led cooperation as a part of a Chip 4 or similar group. In the near future, the US Department of State will create a USD $500 million “International Technology Security and Innovation Fund,” through which the US government will seek to provide support for international information and communications technology security, as well as semiconductor supply chain initiatives. State will work closely with the Chips Program Office (CPO) located in the US Department of Commerce and other agencies—such as the US Agency for International Development (USAID), the Export-Import Bank, and the US International Development Finance Corporation—to support international semiconductor supply chain activities and projects with this fund.

CHIPS Act funding is designed to prohibit the disbursal of funds to “foreign entities of concern” (i.e., China), but does not distinguish between US and foreign companies when it comes to eligibility for grants and tax credits. This is intended to assuage the concerns of companies such as TSMC and Samsung, which are building and operating multi-billion-dollar fabrication facilities in Arizona and Texas, respectively. Biden Administration program directors at the CHIPS Program Office could potentially offer grants and tax credits to companies headquartered in “Chip 4” countries, so long as they go through the same application process as US-based companies and the funds are used to support their US-based manufacturing and fabrication operations. More information about the eligibility and application process for these programs will be available as the implementation of CHIPS and Science Act programs continue to take shape over the coming months after an open comment period closes in November and Commerce releases specific funding application guidance by early February 2023.

A finely tuned approach—informed by an understanding of the supply chain bottlenecks and the needs that commercial entities in all four countries have for Chinese components—could be very important in laying the groundwork for effective and efficient semiconductor and supply chain coordination between the United States, Taiwan, Japan, and South Korea as funds become available for private companies and the State Department assesses the global supply chain environment.

The Biden Administration has thus far been unable to get other players—specifically Taiwan, South Korea, and Japan—to take concrete steps and form the Chip 4 group to advance substantive policy objectives in the past year. This is unlikely to change at the government level, as the reports from the first meeting did not indicate that a follow-up meeting would take place in the near future. Additionally, it omitted announcements regarding a formal agenda for the group. This could suggest that the group will face an uphill battle as it works to develop and implement policies—despite general alignment between Washington, Taipei, Tokyo, and Seoul on the issues of semiconductor supply chains and semiconductor manufacturing.

In the meantime, Taiwanese Minister of Economic Affairs Wang Mei-hua (王美花) recently stated that Taiwanese companies would follow the new US export controls that aim to target China’s ability to purchase and manufacture high-end chips in military applications, as well as to restrict Beijing’s ability to obtain advanced computing chips and manufacture advanced semiconductors. As Chip 4 discussions will likely remain slow and limited in concrete results, export control collaboration and cooperation may be the most successful and impactful venue for deeper US-Taiwan technology relations in the near term.

The main point: The so-called “Chip 4” grouping could prove to be a viable forum for coordinating technology and supply chain policy between the United States, Taiwan, Japan, and South Korea. However, each partner has thus far expressed reservations about the group, suggesting that the United States will face an uphill battle in the near-term.