Eric Chan is a non-resident fellow at the Global Taiwan Institute and a senior airpower strategist for the US Air Force. The views in this article are the author’s own, and are not intended to represent those of his affiliate organizations.
Tags
Military Implications of the CCP 20th Party Congress for Xi’s Taiwan Policy

With the conclusion of the Chinese Communist Party’s (CCP) 20th Party Congress on October 22, many observers of political developments in the People’s Republic of China (PRC) are coming to a similar set of conclusions regarding the future direction of the CCP. These changes were surprisingly extensive in nature, breaking multiple, long-held party norms.

The changes from this Party Congress, as well as the broader party membership’s muted response, have a number of implications for the armed wing of the party, the People’s Liberation Army (PLA). In this article, I look at both Xi’s “Work Report to the 20th Party Congress,” along with the subsequent actions from the Party Congress, to assess these military implications and what they might mean for Taiwan and the United States.

The Political Factors Driving Changes to the PLA

First and foremost, CCP General Secretary Xi Jinping (習近平) has successfully dismantled Deng Xiaoping’s (鄧小平) framework of collective leadership, as well as the informal party factions that formerly operated under the institutional surface. This is demonstrated most vividly by personnel changes in the Politburo Standing Committee (PBSC, 中央政治局常委會). The PBSC was the designated institution for the party to exercise collective supreme power under the principle of “democratic centralism” (民主集中). Previously, the seven members of the PBSC were consultatively selected, with the party general secretary acting as first among equals. Now, the PBSC has been packed with Xi loyalists, and relatively powerless loyalists at that. Age-wise, none of the members are in a credible position to be Xi’s successor. For that matter, most of them are unlikely to remain beyond the next Party Congress in 2027.

Xi’s reach has gone beyond the PBSC, to the level of the broader Politburo (中央政治局). The Politburo is the second-rank, 24-member institution that has traditionally served to identify and groom future decision-makers for ascension to the PBSC. In this case, Xi has micromanaged down to eliminate potential future challengers such as Hu Chunhua (胡春華). In doing so, Xi has shown that he can exercise the full powers of a “core leader” (領導核心) to override party norms; this was a title that he picked up in 2015, but without the powers that he has demonstrated as of late.

Second, statist economic policy has returned in full force. This does not just mean an increase in state industrial policy, but also the elevation of national security objectives (for instance, breaking party-identified energy and technology “strangleholds”) and the prioritization of political/ideological objectives (e.g., zero-COVID policies) over pure economic growth.

Third, national security has been broadly redefined as “multi-dimensional” in conception. This is meant to propagate Xi’s belief in the connection between domestic control, party security, and external challenges (primarily the ideological competition with the United States). It is also meant to underline the perceived necessity of greater core control over the PLA.

The first and most important implication for the military is that at the strategic level, decision-making will likely be more rapid, with fewer checks and balances. As mentioned, the PBSC has been transformed from an oligarchical and collective decision-making forum to an executor of Xi’s will. In military parlance, the “Observe, Orient, Decide, Act” (OODA) loop has been shortened due to personnel changes at the PBSC and also at the Central Military Commission (CMC, 中央軍事委員會). As the other PBSC members are both ideologically and factionally aligned with Xi—and do not have significant political power bases of their own—it is unlikely they would either desire to oppose (or have the power to oppose) any decision made by Xi. Thus, Xi will likely find it easier to take risky actions given the lack of serious intra-party political opposition.

Barring PBSC opposition, the next limiting factor to a Taiwan invasion would be the CMC’s combined assessment of PLA capability against its existing war plans. Here, too, Xi has made a number of revealing, norm-breaking changes to the structure of the CMC. First, General He Weidong (何衛東) was catapulted to the CMC second vice chairman position, despite not being a prior CMC member. General He was the commander of the Eastern Theater Command (東部戰區), which oversees most PLA activity against Taiwan. This indicates that operational experience running a joint command and political ties with Xi were likely instrumental causes of this meteoric rise. Second, General Zhang Youxia (張又俠) was retained as the CMC first vice chairman, despite exceeding the unofficial retirement age of 68—likely for the sake of continuity, as well as for his combat experience.

Thus, it is clear that Xi prioritized several things in his personnel shifts at the CMC. First, personal, familial, and political ties to Xi himself; and second, a continued focus on combat experience. The first priority is meant to secure high-level military support throughout a predicted period of heightened internal tension (such as the continuation of an anti-corruption crackdown) as well as external tension (Taiwan, and competition with the United States). Xi’s work report repeatedly emphasizes the need to “enhance political loyalty to the military” above the tasks that would also be expected for a national military: “strengthen the military through reform,” “boost combat preparedness,” and “enhance our military capabilities.”

However, it will likely also mean increased deference throughout the ranks to political demands, just as “wolf warrior diplomacy” in the PRC diplomatic corps has remained in vogue, despite seasoned diplomats knowing full well that such actions have backfired with respect to the PRC’s global image. Thus, there is a significant risk that the “best military advice” provided by the PLA to a CMC dominated by Xi loyalists, and headed by Xi himself as the chairman (中央軍事委員會主席), will increasingly be twisted to what Xi wants to hear. 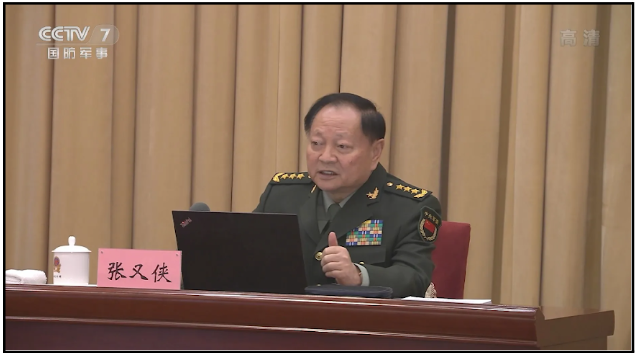 Ghosts of the Sino-Vietnam War

The second priority for Xi’s appointments to the CMC—combat experience—implies that Xi believes that the PLA is at a critical disadvantage versus potential adversaries due to its untested state. Moreover, Xi is well known to be fixated on history. Accordingly, in his work report, one of his highlighted priorities is to “encourage military personnel to learn more about the history of the military,” with the ostensible goal of improving military understanding of party theory. Elevation of combat-tested generals should be viewed as an extension of this political demand for greater military deference to the party.

As mentioned, General Zhang had combat experience in the Sino-Vietnam War of 1979, as well as a 1984 border clash (the Battle of Laoshan [老山戰役]). Another new member of the CMC, General Liu Zhenli (劉振立), has combat experience as a company commander from a 1986 border clash. Notably, General Liu is taking the position of the chief of the Joint Staff Department, replacing General Li Zuocheng (李作成), who led a company in the 1979 war. With the exception of General He, the other members of the CMC without combat experience hold support roles: Li Shangfu (李尚福), minister of national defense (a largely ceremonial role for PLA international engagement); Miao Hua (苗華), head of political work; and Zhang Shenmin (張昇民), head of discipline and inspection.

Given Generals Zhang and Liu’s respective positions and ability to drive the rest of the CMC, this indicates that lessons of the Sino-Vietnam War and the later border clashes will continue to weigh heavily on PLA modernization priorities. As a result, the second implication is that at the operational level, the PLA will likely re-double its historical focus on the Sino-Vietnam War for lessons learned, and view the Russia-Ukraine War through that lens.

This is particularly likely given the numerous parallels between the PLA’s performance in Vietnam and the Russian military’s current performance in Ukraine. For instance, the PLA was under significant political pressure to rapidly conclude the war to minimize the chances of Soviet intervention. Combined with an optimistic military leadership belief that the PLA would easily seize Vietnam’s northern provincial capitals and destroy the regular Vietnamese army, PLA staff developed an overly complex war plan. With a badly inadequate logistics system, this rapidly led to ammunition shortages among the 200,000-man invasion force just days into the fighting. Finally, a combination of ineffective tactics and the aforementioned logistics issues led to mutinously poor morale and low initiative. While the PLA ended up capturing the targeted provincial capitals, they did so far past their timeline, and at high cost. Moreover, most of the casualties on the Vietnamese side were sustained by militia and second-line forces, with the regular army largely untouched at the end of war. The war was a traumatic experience for young PLA officers, with the PLA sustaining tens of thousands of deaths in a month of combat. Thus, Xi’s elevation of more general officers with Sino-Vietnam War and border clash experience will inevitably lead to analyses of modern war being viewed through those personal and historical lenses.

However, this should not be taken to mean that this will result in a more war-skeptical party. While the war was an institutional embarrassment for the PLA due to the numerous operational failures, the party nevertheless viewed it as a strategic success in driving a wedge between the Soviet Union and Vietnam, while deterring the Vietnamese. Meanwhile, the war was personally successful for its architect, Deng Xiaoping, who leveraged the results to consolidate his power in the party and ensure his mastery over the humbled PLA leadership—a historical lesson that is not likely to be lost on Xi.

The end of the 20th Party Congress has ushered in a new era of control for Xi Jinping. Intra-party checks and balances to Xi’s power, both formal and informal, have been demolished. This has resulted in a party that is not only more malleable to Xi’s will, but also a party cadre that will seek to curry favor with the leader. This has significant implications for the PLA and its ability to provide unvarnished military expertise. Moreover, Xi’s fixation on history and reliance on the few military leaders with combat experience will mean that the Sino-Vietnam War will play an even larger role in PLA development. This has secondary implications for a potential Taiwan invasion. The PLA build-up for an invasion will certainly be exhaustive and telegraphed well in advance. This will include significant psychological and logistical preparation, as well as early mobilization of both people and the economy. This reduces the chance of a “bolt from the blue” surprise attack, but the PLA will likely be better prepared for the possibility of a long, grinding war of attrition.

The main point: The 20th Party Congress has resulted in solidified political control for Xi Jinping. Militarily, this will mean that strategic-level decision-making will become more rapid, at the cost of a higher risk of miscalculation. Operationally, the PLA leadership will likely be even more fixated on the lessons of the Sino-Vietnam War as a model for PLA modernization and preparation for a potential invasion of Taiwan.

Parsing Signals from US and Chinese Patrols around Taiwan 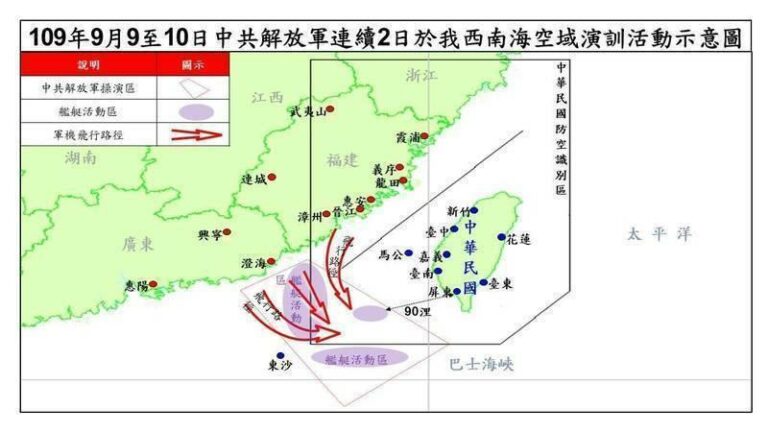