Ripple or Wave?: Assessing the Impact of China’s Mass Protests on Cross-Strait Relations

Ripple or Wave?: Assessing the Impact of China’s Mass Protests on Cross-Strait Relations

In the last week of November, mass protests erupted in cities across the People’s Republic of China (PRC). The immediate trigger of this unprecedented public outburst was the deaths of as many as 40 people in an apartment fire in Urumqi (Xinjiang), where stringent zero-COVID lockdown measures reportedly impeded rescue efforts. Subsequent protests occurred in Nanjing, Shanghai, Lanzhou, Chengdu, and other large cities—including Beijing, where students demonstrated at elite schools such as Tsinghua University, which were hotbeds of activism during the 1989 student protest movement.

Although the initial impetus for people taking to the streets was frustration with the official “dynamic clearance” (動態清零) zero-COVID policy, the protests quickly morphed into a broader pushback against Chinese Communist Party (CCP) General Secretary Xi Jinping’s (習近平) leadership and ideology, as well as China’s lack of genuine democracy, rule of law and individual rights. As a result, the short-lived but impactful “white paper revolution” (白紙革命) movement was undoubtedly deeply threatening to the CCP leadership. For the first time, disparate groups—students, unemployed youth, disaffected factory laborers, migrant workers, ethnic minorities, women, and LGBT people—seized on a shared symbol (the iconic sheet of blank paper) to express mutual or overlapping grievances.

As the outcome of the PRC’s epidemic prevention efforts—and the future public responses they might engender—remains in flux, gauging the impact of recent protests on cross-Strait relations is an uncertain endeavor. This article examines the potential externalities of the protests for cross-Strait relations in three areas: 1) the prospects for an even-further increased PRC focus on security; 2) the possibilities for diminished enthusiasm among Chinese youth for Xi’s leadership; and 3) the likelihood of increased support in Taiwan for indefinite separation from China. 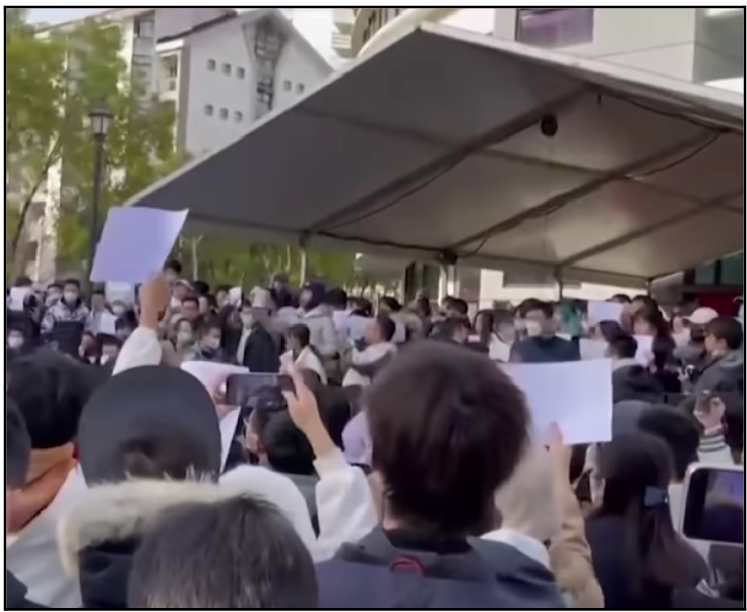 Image: A student demonstration at Beijing’s Tsinghua University on November 27, in which many students held aloft symbolic blank sheets of paper and shouted demands for “democracy and rule by law” (民主法治). (Image source: VOA/YouTube)

The CCP’s “Holistic” Approach to Security

On November 29, with protests only recently suppressed in Beijing and Shanghai and still simmering in Guangzhou, the CCP’s Central Political and Legal Affairs Commission (CPLC, 中央政法委) convened a meeting. [1] In his remarks to open the meeting, CPLC Secretary General (and recently appointed Politburo member) Chen Wenqing (陳文清), who currently also serves as PRC minister of state security, stressed the deep necessity of unwavering adherence to the “Two Establishes” (兩個確立) to establish Xi’s status as core leader, and Xi Jinping Thought as the foundation of party ideology. Importantly, Chen called for resolute efforts to fully implement Xi’s “Holistic National Security Concept” (總體國家安全觀),  which takes an extremely expansive approach to security. [2]

Notably, Chen’s emphasis on achieving “holistic security” came in a context in which he called on political-legal organs to “resolutely crack down on infiltration and sabotage activities by hostile forces in accordance with the law, resolutely crush illegal and criminal acts that disrupt social order, and effectively maintain overall social stability.” This, along with the massive public security presence that has been deployed around the country in the wake of the protests, suggests that the PRC is likely to allocate an even higher share of its resources to domestic security and “stability maintenance” in the face of growing opposition from civil society—which for the CCP, represents subversion and dangerous instability.

Despite this inward turn, Taipei and Washington should desist from wishful thinking that the PRC will be forced to make tradeoffs between external and internal security spending. As the “holistic national security” concept underscores, the CCP does not conceive of its internal and external security as separate. Consequently, Beijing is likely to respond to the protests by placing an increased emphasis on security across the board. As a result, bolstering internal security and stability maintenance is not likely to come at the expense of sustaining the currently rapid pace of People’s Liberation Army (PLA) modernization, which Xi has indicated will be a key priority in his third term. Furthermore, as the PLA is a party force and not a national military, its foremost mission has always been to safeguard and sustain party control, to include supporting internal stability. This has particularly been the case since the 2015-2016 military reform and reorganization, which transferred the People’s Armed Police (PAP, 人民武裝警察) from shared civilian and military command to the sole control of the Central Military Commission (CMC, 中央軍事委員會).

Are China’s Youth on Board?

Over the past three decades, the CCP has fueled a nationalistic shift in public opinion through the systematic cultivation of “patriotic” sentiment among Chinese youth. Xi has capitalized on this nationalistic turn by establishing the “great rejuvenation of the Chinese nation” (中華民族偉大復興) as a central objective. As official sources—including Xi himself—often stress, achieving China’s “complete reunification” is the CCP’s historic mission, and one that is “indispensable for the realization of China’s rejuvenation.” This also aligns with public opinion in the PRC, where the great majority of citizens believe that Taiwan is a part of China.

However, the recent protests have cast into full relief an unspoken but threatening truth for the party: that the ultimate loyalty of most Chinese people, including many elites (as the recent protests at top-tier universities demonstrated), is to the Chinese nation and civilization, not the CCP. As Willy Wo-Lap Lam notes, while the sheets of blank paper represent censorship and a lack of freedom, their whiteness or lack of color also indicates that the movement is grassroots rather than a so-called “color revolution” (颜色革命) instigated by foreign forces, as the CCP falsely claims.

The protesters’ rejection of the CCP’s chosen narrative that foreign forces are responsible for China’s domestic woes suggests that for Xi, pursuing a conflict with Taiwan (and by extension, likely the United States as well) would not necessarily have a “rally around the flag” effect on domestic public opinion. As Russia’s recent experience in Ukraine has demonstrated, the high potential costs of such a conflict (economic privations, unpopular military service requirements, the risk of a wider war, etc.) would not likely engender widespread enthusiasm among Chinese youth. Should Xi opt to invade Taiwan in the near-term, as some US observers posit, he would be calling on China’s youth, who are now enduring a de facto recession on the heels of three years of life under zero-COVID restrictions, to make even greater sacrifices. About one in five Chinese youth between the ages of 16 and 24 are currently unemployed. Furthermore, even those young people who are employed have grown increasingly disillusioned with a culture of grueling yet chronically undercompensated work.

How Will the Protests Impact Taiwanese Views of China’s Future?

A key externality of the protests is their potential to impact Taiwanese public opinion on the PRC’s political trajectory—which in turn, could influence public perspectives on cross-Strait policy. In the short term, this could create potential opportunities for the opposition Kuomintang (KMT, 國民黨) and difficulties for the governing Democratic Progressive Party (DPP, 民進黨), which struggled during the 2022 local elections after running on a platform of strict epidemic prevention policies. Under current party Chairman Eric Chu (朱立倫) and his immediate predecessor Johnny Chiang (江啟臣), the KMT has made significant adjustments since its 2020 electoral losses, emphasizing its commitment to both the status quo in the Taiwan Strait and close unofficial ties with the United States.

Nevertheless, if the CCP’s reaction to the protests is to scale up its already enormous internal security apparatus, which appears likely with public security organs already busily mining digital surveillance data to track down protest participants, this will likely result in an increasing majority of Taiwanese rejecting any possibility of a shared future with the PRC. Such a shift would render the KMT’s continued adherence to the so-called “1992 Consensus” (九二共識) even more detrimental to its political standing among the general electorate in Taiwan.

Although the November protests may have initially generated faint glimmers of hope about the possibility of China embarking on an alternate political path, their subsequent suppression is likely to deepen, rather than narrow, the cross-strait chasm between the PRC and Taiwan. The “holistic security” concept will likely assume an even more central role in conditioning Beijing to view its external and internal environment, including Taiwan and the Taiwan Strait, through a securitized framework. From a Taiwanese security perspective, if the frustrations with the CCP’s policies that engendered the protests persist, this could further sap youth enthusiasm for Xi Jinping’s drive to achieve the “great rejuvenation of the Chinese nation.” Finally, the protests and their subsequent repression could also further the deterioration of the PRC’s image in Taiwanese public opinion, leading growing numbers of the island’s citizens to conclude that the political futures of China and Taiwan are fundamentally incompatible.

The main point: The ramifications of the recently suppressed “white paper revolution” protests for cross-strait relations appear mixed. On the one hand, Beijing will likely focus even more heavily on internal and external security, which will likely further sour Taiwanese public opinion on the idea of closer relations with China; however, the movement reveals deep youth disillusionment with Xi’s vision for China’s future, which suggests there would be minimal popular enthusiasm for using military means to achieve “reunification” with Taiwan.

[1] The CPLC is the top body in the political-legal apparatus (政法系统) overseeing the courts, procuratorates and police force. For an examination of Xi’s purge of the political-legal apparatus, see Willy Wo-Lap Lam, “Factional Strife Intensifies as Xi Strives to Consolidate Power,” China Brief, October 14 2021; and “Xi Facing Opposition on Different Fronts in Run-Up to Key Party Plenum,” China Brief, September 23, 2021.

[3] In his January 2019 remarks to commemorate the 40th anniversary of the Message to Taiwan Compatriots, Xi defined the 1992 Consensus as an understanding that “both sides of the Taiwan Straits belong to one China and will work together toward national reunification,” which he said will be achieved through “the well-conceived concept of ‘One Country, Two Systems.’”